Q.E.D. is an acronym for the Latin phrase quod erat demonstrandum, a fancy way to show off you just logically proved something.

Where does Q.E.D. come from? 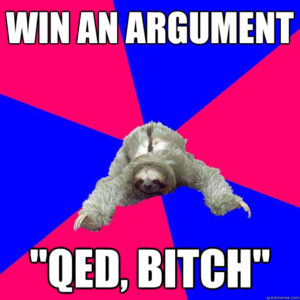 The Latin quod erat demonstrandum literally means “what was to be demonstrated.” It is actually a transliteration of a phrase ancient Greek mathematicians placed at the end of logical proofs—a kind of stamp that says “I proved what I set out to.

Usage for the abbreviation Q.E.D. is found from the 17th century. The philosopher Spinoza famously used Q.E.D. at the end of an argument in his 1677 Ethics.

By the early 20th century, Q.E.D. branched out of math and philosophy into a more general term, kind of like “therefore,” “so it follows,” “obviously,” “thus,” “boom, there it is.” You get the idea. 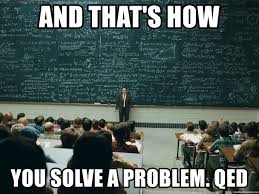 Meme Generator
1. Things which exist occupy time and /or space. / 1a. As distinct from Ideas and thoughts are not things, so they do not. / 2. God is “beyond space and time,” so he occupies neither space nor time. Therefore: c: God is not a thing that exists. QED.
@AtheistEngineer, September 2018
SEE MORE EXAMPLES

Saying Q.E.D. has quite a scholarly ring to it, not least because of its association with Latin, math, and erudition more generally.

When writing or speaking, you can use Q.E.D. to signal to your audience that you’ve logically proved your point step-by-step. For example: Dictionary.com is the best online dictionary. They hire the smartest researchers and writers. Q.E.D.

JFC, I just realized Kavanaugh's bizarre calendar schtick wasn't just the world's lamest alibi. It was STRICT CONSTRUCTIONISM. That is how people like him ACTUALLY THINK. "Well, I didn't write it down, QED it didn't happen." Our reigning legal philosophy at work.

People will ironically use Q.E.D. at the end of a statement as if they’ve made an argument … though it’s just their opinion.

There is not more question. Maybe there was before, but not any more. I'm done hearing it. Christian Yelich is the NL MVP. Period. End of discussion. QED.

Other languages have their own versions, such as the French C.Q.F.D. (ce qu’il fallait démontrer).

Q.E.D. can also stand for quantum electrodynamics, a field of physics whose math would make even those ancient Greek geometers cower.

This is not meant to be a formal definition of Q.E.D. like most terms we define on Dictionary.com, but is rather an informal word summary that hopefully touches upon the key aspects of the meaning and usage of Q.E.D. that will help our users expand their word mastery.