Feedback
Previous Linalool, Floccinaucinihilipilification, And More Trending Words On Dictionary.com Next Why Is Thursday Named For A Comic Book Character?

1. Tracy Morgan’s schooling on the difference between well and good.

Tracy is known for having surprising moments of insight, but this grammar smackdown takes the cake.

2. The time even Oscar Martinez was stumped by English grammar rules.

We’ve all faked knowing how to use terms like who and whom (because, really, English is complicated enough). This scene nails that perplexing feeling when faced with ridiculous grammar rules. Also, Toby should really consider taking a job outside of HR. He did a better job of explaining the difference between who and whom than most English teachers … Yeah, French words are weird. And, English is all the weirder for using them.

4. The time Flaca laid down the law about the phrase “I could care less.” 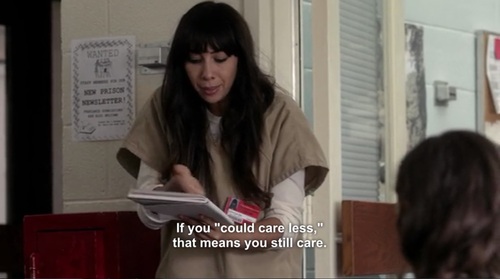 It’s grammar, tonta. Best debate about proper English ever. And right after this, the discussion of language’s constant evolution was also mind-blowing. You’ll just have to binge-watch ALL of OITNB to see Piper’s fantastically academic response to this debate.

5. When the Bluths were burned by the homonyms all right and alright.

The literal doctor on Arrested Development is comedic gold. You can’t go wrong with a simple, old-school grammar pun. Classic.

6. Lorelai’s usage of this malapropism to mess with Rory.

Malapropism: using the wrong word in the wrong context when it sounds similar to the one you’re trying to use. Aren’t jokes about word usage hilarious? Well, not always, but they are when Lorelai’s around.

7. The time Dwight perfectly described how some letters are just better than others. 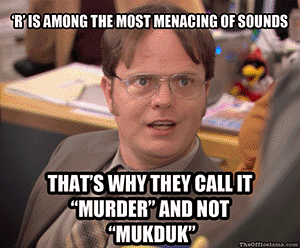 Imagine if we did call it mukduk, though. Then K would be a far more menacing letter. Right now, though, we just can’t seem to take K seriously. In fact, we rarely even let it stand on its own without C around to make sure it’s doing its job right.

8. All the times Ross told the Friends to say whom instead of who.

Ah, Ross. Everyone’s (least) favorite pedant. We’d suggest renaming this “The One With All the Grammar Lessons,” but that would likely be the name of every episode.

Previous Linalool, Floccinaucinihilipilification, And More Trending Words On Dictionary.com Next Why Is Thursday Named For A Comic Book Character?
RELATED POSTS