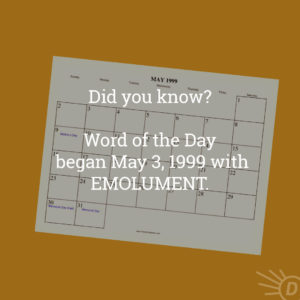 It’s hard to believe, but this month marks 20 years of daily lexical morsels from Word of the Day. What started as a small audience of intrepid logophiles, who braved spotty dial-up connections for their quotidian word fix in 1999, has blossomed into a vibrant community of Word of the Day devotees, who bring context, conversation, inspiration, and personal connections to our selections every day.

To celebrate this vigesimal birthday, we took a stroll through the Word of the Day archives to see what words were featured on notable dates and reflect on some of the memorable moments and trends of the last two decades. The synchronicities are nothing short of—oh, we have so many wonderful words to choose from—superlative, serendipitous, and scintillating.In Part I of this two-part retrospective, we’re serving up ten favorites from the first decade of Word of the Day: 1999–2008. Enjoy!

The hypothetical computer meltdown known as Y2K, which threatened to unleash logistical horrors of biblical proportions, was looming large in 1999. On the final day of the millennium, Word of the Day fans were taking the longview with fin de siècle.

This throwback term translates from French as “end of century” and connotes a world-weariness characteristic of art and literature in the 1880s and ’90s.

“any artificial or improbable device resolving the difficulties of a plot.”
– November 7, 2000

November 7, 2000 is the date that millions of voters cast their ballot for either George W. Bush or Al Gore and wearily watched as the tallies triggered a recount in Florida.

Deus ex machina, from Latin meaning “god from a machine,” is usually used in a pejorative sense to refer to an implausible and seemingly superficial or oversimplified resolution in a book, play, or film, as in “It was all a dream!”

The word chimera comes from Greek mythology, where it refers to a fire-breathing monster with a lion’s head, a goat’s body, and a serpent’s tail.

Mythical beasts were a mainstay of the wizarding world that had captured popular imagination by 2001: Pottermania was in full swing with fans of J.K. Rowling’s books camping outside of bookstores to get new installments hot off the presses. About a month after this term was featured, the first Harry Potter movie hit theaters and quickly became the highest grossing film of the year, raising Pottermania to fever pitch.

“satisfaction or pleasure felt at someone else’s misfortune.”
– September 4, 2002

The early aughts saw the rapid rise of reality TV with Survivor and Big Brother launching in 2000. In 2002, we were introduced to a new format: American Idol, which put Simon Cowell front and center as a villainous judge who scathingly critiqued Idol-hopefuls, and in so doing, drew strong reactions from the audience. Ratings soared, and the conflicted emotional state of schadenfreude (literally “harm joy” in German) was further embraced as a bankable viewing experience.

This word was featured, incidentally, on the day that Kelly Clarkson won the inaugural season.

We’re not suggesting the word selection was in any way intentionally aligned with Facebook’s unveiling, but we can’t resist noting pulchritude. Ultimately from the Latin for “beautiful,” it’s a winning word.

YouTube was launched on this day as, believe it or not, a dating site. The founders thought video would be a great format for singles to share what they were looking for in a partner, or, as Word of the Day fans might say, an inamorata or inamorato, literally “inflamed with love” in Italian. Little did they know that what users truly wanted to broadcast (and watch for hours on end) was so much simpler: cats.

An aubade, the morning counterpoint to the serenade, is a musical expression of love or appreciation. The term brings to mind the pleasant sound of birds welcoming the day.

Just like the sweet and gentle chirping that blessed us all on this day in history: March 21, 2006, which marked the unveiling of Twitter … and the beginning of a cultural and political landscape mediated by tweet.

The word omnipresent is typically used in the context of divine beings, as in omnipresent god.

But, with the unveiling of the iPhone in June 2007, some might say we all moved a little bit closer to being omnipresent ourselves, for better or for worse, as we embraced a new era of convenience—and constant connection—at our fingertips.

It was a historic night, November 4, 2008: Barack Obama was elected as the first African-American president of the US. Where was Word of the Day? Snacking on the word epicure, apparently.

This word for a connoisseur of fine food and wine comes from Epicurus, a Greek philosopher who taught—ironically enough—moderation in all things. We can’t say whether anyone in the Obama family considered themselves epicures, but we’re pretty sure Epicurus, who founded a school called The Garden, would have delighted in Michelle’s White House veggie garden.

Home / Trending Words / Celebrating 20 Years Of Word Of The Day!