SYNONYM OF THE DAY
Double your word knowledge with the Synonym of the Day!
SEE TODAY'S SYNONYM
Load More
Oct 15 totis viribus
Oct 17 ambivert
Word of the Day Calendar

style of speaking or writing as dependent upon choice of words.

What is the origin of diction?

Diction ultimately comes from Latin dictiō (inflectional stem dictiōn-) “speaking, act of speaking, (oracular) utterance, word, expression,” a derivative of the verb dīcere “to say, speak, talk.” Dictiō, though a word in general Latin vocabulary, is naturally connected very closely with rhetoric and law, two very important professions among the Romans. Dīcere, earlier deicere, comes from the very common Proto-Indo-European root deik- (also deig-), dik- (dig-) “to show, point out,” and appears in Greek deíknysthai “to show, point out,” Gothic ga-teihan “to show, make clear,” and German zeigen “to show.” The 13th-century English philologist, grammarian, and university professor John of Garland coined the word dictiōnārius as the title for one of his Latin textbooks in which he grouped lexical items thematically. Garland explained that his dictiōnārius was not based on the sense of dictiō as a single word, but dictiō in the sense of connected discourse. In the 14th century the Benedictine monk, translator, and encyclopedist Pierre Bersuire used the term dictiōnārium as the title for an alphabetical encyclopedia of the Vulgate (St. Jerome’s version of the Latin Bible, completed at the end of the 4th century). By the 15th century, dictiōnārium acquired the generalized sense “alphabetized wordbook.” Diction entered English in the 15th century. 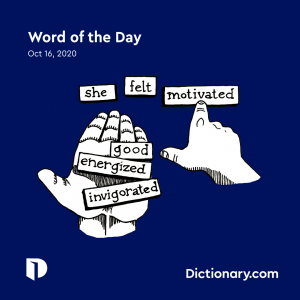 how is diction used?

She did more than powder noses; she advised on diction and apparel and helped commanders in chief put their best selves forward for television.

His diction mirrors the emotional gravity in each scene, which, combined with raw honesty, is what makes his writing so relatable.

Khrysgiana Pineda, "Review: Bill Clegg's 'The End of the Day' a story of friendship, love and memory," USA Today, September 30, 2020

What is the origin of totis viribus?

The English adverbial phrase totis viribus, “with all (one’s) might,” comes straight from the Latin phrase tōtīs vīribus, the ablative plural of the adjective tōtus “all, entire, the whole of” and the noun vīs (plural inflectional stem vīr-) “strength, physical strength, force.” More fully, the phrase tōtīs vīribus is an ablative of manner, just in case it’s on tomorrow’s quiz. Totis viribus is uncommon in English; it is used, as one would expect, mostly by lawyers. Vīs has an exact equivalent in Greek ĩs (also wĩs in some dialects), “force, might,” a Homeric word that appears in the instrumental case form ĩphi in the poetic formulas ĩphi máchesthai “to fight with strength,” and ĩphi anássein “to rule with might.” Totis viribus entered English in the 16th century.

how is totis viribus used?

As a fictitious autobiographer—in the power, or at least in the fidelity, of first conceiving a character, and then throwing himself into it totis viribus, and by ten thousand strokes of humour, sense, an observation … Mr. Galt surpasses every writer certainly of this day, and perhaps of any time.

"Review of New Books: Bogle Corbet; or, the Emigrants", The London and Paris Observer, June 12, 1831

Argued by Moses Levy, "The Trial of Frederick Eberle and Others for Conspiracy to Prevent the Use of the English Language, 1816," American State Trials, Vol. 12, 1919