a good deed or favor; an instance of kindness: benignities born of selfless devotion.

What is the origin of benignity?

Benignity comes via Old and Middle French from the Latin noun benignitās (inflectional stem benignitāt-) “kindness, graciousness, friendliness,” a derivative of the adjective benignus “kind, gracious, benign.” Benignus is composed of the adverb bene “well, neatly, rightly” (from the adjective bonus “good”) and –gnus, a suffix derived from the base of the verb gignere “to beget” (the sense is “good by nature, naturally good”; consider its English opposite, malign). Benignity entered English in the second half of the 14th century.

how is benignity used?

… there are young men and maidens pacing to and fro beside me, and to them the moon is only one of the innumerable benignities with which nature smiles on youth and love.

with a thousand generous benignities she stifled my ‘no’s,’ … and all I had breath to say at last, was, that ‘there was time enough for plans of that kind.’

SYNONYM OF THE DAY
Double your word knowledge with the Synonym of the Day!
SEE TODAY'S SYNONYM
Load More
Dec 04 snarf
Dec 02 existential

of or relating to existence: Does climate change pose an existential threat to humanity?

What is the origin of existential?

Existential comes from Late Latin existentiālis “relating to existence,” an adjective form of ex(s)istentia “existence, state of existing, something that exists.” Ex(s)istentia is in turn based on classical Latin ex(s)istere “to exist, appear, emerge,” a verb composed of the prefix ex- “out of” and sistere “to stand, cause to stand, stop, set up.” In its first sense “of or relating to existence,” as in “The economic downturn posed an existential threat to small businesses,” existential is recorded in English in the mid-1600s. The second sense of existential, “of, relating to, or characteristic of philosophical existentialism; concerned with the nature of human existence as determined by the individual’s freely made choices,” is found by the late 1800s. Existentialism comes from German Existentialismus, coined in 1919. It is a movement closely associated with such philosophers as Jean-Paul Sartre and Martin Heidegger, and stresses the individual’s unique position as a self-determining agent responsible for making meaningful, authentic choices in a universe seen as purposeless or irrational. 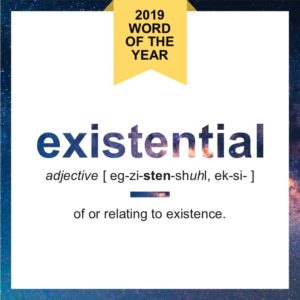 how is existential used?

I have a dream that the people in power, as well as the media, start treating this crisis like the existential emergency it is.

It is perhaps the darkest of all the existential crises facing the toy characters in these movies, although the film finds a clever way of having him [Forky] embrace his identity as a toy by intersecting it with what he loves about garbage.

Watch existential as the word of the day

successive, alternating, or changing phases or conditions, as of life or fortune; ups and downs: They remained friends through the vicissitudes of 40 years.

Look it up
Dec 02 existential
learn about the english language

What is the origin of vicissitudes?

Vicissitudes, the plural of vicissitude, is about ten times more common than the singular. Vicissitude comes via Middle French from Latin vicissitūdō (inflectional stem vicissitūdin-) “change, reversal, regular change or succession, reciprocity.” Vicissitūdō derives from vicissim “in turn, for a change, reciprocally,” a fossilized accusative noun used as an adverb, from the noun vicis “a turn, change, interchange.” Vicis (stem vic-) is the genitive singular of vix, a noun form that does not exist in Latin. The element –cissim is a combining form of the adverb cessim “giving way, yielding,” a derivative of cēdere “to go, proceed.” Vicissitude entered English in the second half of the 16th century.

how is vicissitudes used?

These are people who imagine their boutique blend of gold and goodness can protect them from the vicissitudes of life, even as their dynasty dissipates with each passing generation.

Ron Charles, "Is the end of an American dynasty a real tragedy?" Washington Post, April 29, 2019

The marble faces, which stand innumerable along the walls, and have kept themselves so calm through the vicissitudes of twenty centuries, had no sympathy for his disappointment ….

Nathaniel Hawthorne, The Marble Faun, 1860
Load More
Dec 04 snarf
Dec 02 existential
More word of the day
Now Playing: What Does "Existential" Mean To You In 2019?