May 11 crepuscular
May 13 blarney

to grasp or seize (something) suddenly and eagerly; snatch.

What is the origin of cleek?

The Scots verb cleek (past tense claucht or claught) “to grasp or seize” comes from Middle English (Northern and Scots) cleke, cleken, a more conservative form than Southern English clechen “to grab, capture.” Both cleke, cleken and clechen come from Old English clyccan “to bend one’s fingers, clench,” the source of Modern English clutch. The Scots noun cleek means “(large) hook (as for hanging a pot over a fire)”; a second sense, from the shape of a cleek, is “arm” (the body part); a third sense, from the second one, “a golf club with an iron head, a narrow face, and little slope, used for shots from a poor lie on the fairway.” The verb cleek entered English in the late 14th century, the noun in the early 15th.

how is cleek used?

Archie was just about to cleek him, when he made one terrible rush up water, taking out nearly all my line.

SYNONYM OF THE DAY
Double your word knowledge with the Synonym of the Day!
SEE TODAY'S SYNONYM
Load More
May 10 materfamilias
May 12 cleek
Word of the Day Calendar

of, relating to, or resembling twilight; dim; indistinct.

What is the origin of crepuscular?

The euphonious adjective crepuscular, “relating to twilight, dim,” is a derivative of the Latin noun crepusculum “(evening) twilight, dusk” (its opposite, “morning twilight, dawn,” is diliculum, very rare but euphonious in its own right). Crepusculum is most likely a derivative of the adjective creper “obscure, doubtful, uncertain,” of obscure, doubtful, uncertain etymology. Crepuscular entered English in the mid-18th century. 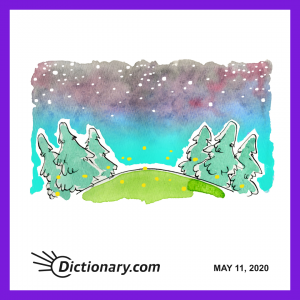 how is crepuscular used?

At dusk the full moon began its rise in the crepuscular light and its glowing would last the entire of that night until it set at dawn.

The whisper of his conviction seemed to open before me a vast and uncertain expanse, as of a crepuscular horizon on a plain at dawn—or was it, perchance, at the coming of the night?

Watch crepuscular as the word of the day

How Does The Word "Crepuscular" Relate To Nighttime?

the mother of a family.

What is the origin of materfamilias?

Materfamilias, “the mother of a family,” is not very common in English, even less common than paterfamilias “the male head of a family, householder.” Materfamilias comes from Latin māterfamiliās, a compound of māter “mother” (nominative singular) and familiās “of a family” (the archaic genitive singular of the noun familia, which in classical Latin is familiae). Māterfamiliās is often written in Latin as two words (māter familiās). Materfamilias entered English in the mid-18th century.

how is materfamilias used?

I do not know a more hard-worked, driven creature than the ordinary Materfamilias at the seaside, more especially if she has left her own large airy house, with its nurseries and schoolrooms, and taken lodgings at a fashionable spot, where every inch of space costs pounds, and where she can never rid herself of her family for one moment.

Uncle Dikran … took Shushan’s side in every family dispute, knowing better than to disagree with the omnipotent materfamilias.

Elif Shafak, The Bastard of Istanbul, 2007