to travel or journey, especially to walk on foot.

What is the origin of peregrinate?

The verb peregrinate, “to go on a journey on foot,” comes from Latin peregrīnātus, the past participle of peregrīnārī “to travel abroad,” a derivative of the adjective and noun peregrīnus “alien, foreign; an alien, a foreigner,” formed from the adverb peregrī “away from home, abroad.” In Roman republican and imperial law, a peregrīnus was a free person or a free community that did not have Roman citizenship (the vast majority of the inhabitants of the Empire). Late Latin peregrīnus became pelegrīnus by a common dissimilation (compare the spelling colonel with its pronunciation). Pelegrīnus has its own history, becoming the source of pilgrim. Peregrinate entered English in the late 16th century.

how is peregrinate used?

Regardless of how they get there, they seem to peregrinate in a fog, for which they can hardly be blamed …

I had peregrinated further to the little hamlet of Bürglen, and peeped into the frescoed chapel which commemorates the hero’s natal scene.

SYNONYM OF THE DAY
Double your word knowledge with the Synonym of the Day!
SEE TODAY'S SYNONYM
Load More
May 03 domicile
May 05 peregrinate
Word of the Day Calendar

a person who has an unexplainable power over people or things, or who seems to enjoy unusual luck and positive outcomes, as if able to exert the power of the Force to mystically influence the universe: The defense lawyer was a jedi—two minutes into his closing argument the jury forgot all of the incriminating evidence that had been presented.

What is the origin of Jedi?

If you are from a galaxy far, far away, you will know what a Jedi is (a member of an order of warrior monks). The order and word were formed a long, long time ago in another galaxy, but in this one the word dates only to 1973. 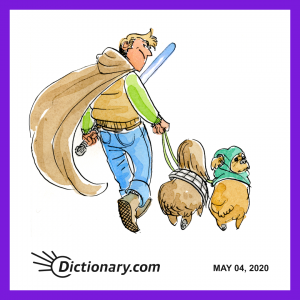 how is Jedi used?

In the Senate, the outspoken Paul and McConnell, the methodical Jedi of the upper chamber, would sometimes disagree on tactics.

In December 2010, McGuire made a pilgrimage to Black Sheep Bikes in Fort Collins, Colo., to learn at the hands of an acknowledged Jedi of bike frame fabrication, James Bleakley.

a place of residence; abode; house or home.

What is the origin of domicile?

Domicile is a very legal-sounding word. Its general meaning is “place of residence, abode, house or home”; its legal meaning is “permanent legal residence, as for tax obligations or voting rights.” (Thus one may be domiciled in New York, paying state income taxes there and voting there, but also have a weekend residence in the Pocono Mountains of Pennsylvania.) Domicile comes from Middle French, from Latin domicilium, formed from the noun domus “house, home” and the suffix –cilium, of uncertain etymology, but probably derived from colere “to live in, inhabit, dwell” (the source of English colony). Latin domicilium has no legal meaning. Domicile entered English in the 15th century.

how is domicile used?

We drove into an older section of the downtown, down a street of brick row houses, and ended up in front of the family’s old domicile …

Choosing the latter alternative, I began by making up my mind to leave the hotel, and take up my quarters in some less pretentious and less expensive domicile.