Look it up
Jun 25 mondegreen
learn about the english language

What is the origin of lugubrious?

The source of English lugubrious is the Latin adjective lūgubris “mournful, sorrowful,” a derivative of the verb lūgēre “to mourn, grieve.” The meaning of lūgēre is closely akin to the Greek adjective lygrós “sad, sorrowful,” and both the Latin and the Greek words derive from the Proto-Indo-European root leug-, loug-, lug– “to break,” source of Sanskrit rugná– (from lugná-) “shattered” and rujáti “(he) breaks to pieces, shatters,” Old Irish lucht and Welsh llwyth, both meaning “load, burden,” Lithuanian lū́žti “to break” (intransitive), and Old English tō-lūcan “to tear to pieces, tear asunder.” Lugubrious entered English in the early 17th century.

how is lugubrious used?

The radio slid from mournful to downright lugubrious. Ridiculously lugubrious. There was even sobbing in the background. Talk about melodramatic.

Cohen’s lugubrious tones always divided opinion; for some they were intrinsic to his melancholic charms, to others a turn-off that blindsided them to the genius of his songcraft, which was always gilded, its cadences measured, its images polished.

Neil Spencer, "Hallelujah and all that ... Leonard Cohen remembered," The Guardian, November 13, 2016

ALEXA, ENABLE DICTIONARY.COM
Now you can ask Alexa what the Word of the Day is at any time.
ENABLE ALEXA
Load More
Jun 25 mondegreen

What is the origin of mondegreen?

The trouble with mondegreens is that they are usually so hysterically funny that you cannot stop citing examples of them instead of describing their “taxonomy” and history. Mondegreen was coined by the U.S. writer and humorist Sylvia Wright (1917-81), who wrote in an article in Harper’s Magazine: “When I was a child, my mother used to read aloud to me from Percy’s Reliques, and one of my favorite poems began, as I remember: ‘Ye Highlands and ye Lowlands, / Oh, where hae ye been? / They hae slain the Earl Amurray, / And Lady Mondegreen,’” the last line being a child’s mishearing and consequent misunderstanding of “laid him on the green.” Ms. Wright persisted in her idiosyncratic version because the real words were less romantic than her own (mis)interpretation in which she always imagined the Bonnie Earl o’ Moray dying beside his faithful lover Lady Mondegreen. 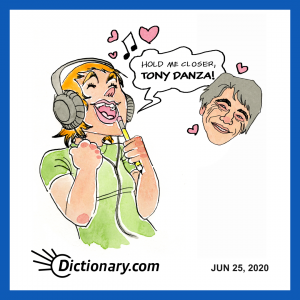 how is mondegreen used?

We’ve been misunderstanding song lyrics for decades, Elton John’s “hold me closer, Tony Danza”—er, “tiny dancer”—­included. These funky musical mishearings even have their own name: mondegreens.

We still have mondegreen moments. Even though I know Creedence Clearwater Revival is singing, “There’s a bad moon on the rise,” lately it sounds suspiciously like “There’s a bathroom on the right.”

What is the origin of withershins?

All you have to remember is that withershins (or widdershins) is the exact opposite of deasil, and you’ll get back home all safe and sound. Withershins is an adverb meaning “going contrary to the natural direction, contrary to the course of the sun, counterclockwise (and therefore unlucky).” Deasil, from Scots Gaelic and Irish Gaelic deiseal “to the right, clockwise, following the sun,” is restricted to Scots. Withershins comes from Middle Low German weddersins, weddersinnes “against the way, in the opposite direction,” formed from wider “back, again” (cognate with the prefix with– in withstand) and sinnes, the genitive case (used as an adverb) of sin “way, course, direction.” Withershins entered English in the first half of the 16th century.

The fishermen, when about to proceed to the fishing, think they would have bad luck, if they were to row the boat “withershins” about.

Abel had walked slowly around the outside of the building, first clockwise and then withershins, but there was still no sign of his quarry, and the rest of the lower hollow was just as empty.

Kate Sedley, The Brothers of Glastonbury, 1997

attacking an opponent's character or motives rather than answering the argument or claim.

What is the origin of ad hominem?

The phrase ad hominem, literally “to a person,” originally meant in rhetoric and logic “by appealing to the audience’s feelings, emotions, or interests, not to their intelligence or reason.” Nowadays the usual meaning of ad hominem is “by attacking an opponent’s character or motives, not their arguments.” Hominem, the object of the preposition ad “to,” is the accusative singular case of the Latin noun homō (inflectional stem homin-) “human being (of either sex), individual, person.”Homō is also used colloquially in Roman comedy (Plautus): Mī homō et mea mulier, vōs salūtō, literally “My man and my woman, I greet you.” In the example from Plautus we can clearly see that homō “man” is contrasted with mulier “woman.” In fact, all the Romance languages use a form of homin– to mean “man” as opposed to woman, e.g., Italian uomo, Spanish hombre (dissimilated from omne, which is contracted from omine), Portuguese homem, Catalan home, French homme, Sardo (Sardinian) omine, and Romanian om. The unpleasant counterpart ad fēminam “appealing to one’s personal feelings about or prejudices against women,” appeared in the 19th century. Ad hominem entered English in the 16th century.

how is ad hominem used?

In the case of online harassment, that instinctive preference for “free speech” may already be shaping the kinds of discussions we have, possibly by discouraging the participation of women, racial and sexual minorities, and anyone else likely to be singled out for ad-hominem abuse.

Greta Thunberg, at age 16, has quickly become one of the most visible climate activists in the world. Her detractors increasingly rely on ad hominem attacks to blunt her influence.

What is the origin of lassitude?

The primary meaning of lassitude is “weariness of mind or body, listlessness,” but lassitude has a second meaning, “indolent indifference.” The immediate source of the English word is Middle French lassitude, which, as in English, may be pleasant or unpleasant fatigue. French lassitude comes from Latin lassitūdō, which in Latin always has an unpleasant sense. Lassitūdō is a derivative of the adjective lassus “tired, weary, exhausted,” a derivative of the Proto-Indo-European root lē-, lə– “to let go, go slack,” extended with –d (lēd-, ləd-). The same root yields Greek lēdeîn “to be tired,” Albanian lodhem “to become tired,” and Germanic lētan, which in Old English becomes lǣtan “to allow, permit, suffer” and let in English. Lassitude entered English in the 16th century.

how is lassitude used?

it occurred to me, as I ate another astringent chip, that this lassitude, the trouble focusing, the sleep difficulties, my exhaustion: Oh yes, I thought, I remember this. I was grieving.

Heavy lassitude settled upon me as I walked away from Peter Kanarjian. There had been too much excitement in the past eighteen hours, and I had had little sleep.

related or akin through males or on the father's side.

What is the origin of agnate?

The English adjective and noun agnate comes straight from Latin agnātus, adgnātus, past participle (also used as a noun) of the verb agnascī (also adnascī and adgnascī) “to be born in addition to; (of a human being) to be born after the father makes his will.” (The noun agnātus, adgnātus is a male blood relative on the father’s side; agnāta, adgnāta is a female blood relative on the father’s side.) Agnascī (adnascī, adgnascī) is a compound verb formed from the preposition and prefix ad, ad– “to, toward, in addition” and the simple verb (g)nascī “to be born” (Romans of the classical age had the same difficulty with initial gn– as modern English speakers do with, say, gnat, gnarly, and Gnostic). The much rarer Latin terms for “a blood relative on the mother’s side” are ēnātus for a male relative and ēnāta for a female, formed from the preposition and prefix ē, ē– (from ex “out of”) and nascī. Agnate entered English in the second half of the 15th century.

how is agnate used?

Rather than writing that one thing is like another, she suggested, pupils might use “commensurate” or “agnate,” which means related through male descent or on the father’s side.

As office-holding tended to become hereditary, however, in the tenth and eleventh centuries, greater emphasis was placed upon agnate descent.

John B. Freed, The Counts of Falkenstein: Noble Self-Consciousness in Twelfth-Century Germany, 1984

a private conversation or interview, usually between two people.

Look it up
Jun 21 agnate
learn about the english language

What is the origin of tête-à-tête?

Tête-à-tête, “a private conversation, usually between two people,” in French literally means “head to head.” The tête in tête-à-tête comes from Old French teste, from testa “head” in Vulgar Latin, from Latin testa “terracotta pot, brick.” Tête-à-tête first occurs in French in a comédie-ballet by Molière entitled La comtesse d’Escarbagnas “The Countess of Escarbagnas” (1671). Testa is the Italian word for head, too, but if you use testa a testa in Italian, you will get only a lot of laughs. Tête-à-tête entered English in the early 18th century.

how is tête-à-tête used?

While she and Osborne were having their delightful tête-à-tête above stairs, old Mrs. Sedley and Captain Dobbin were conversing below upon the state of the affairs ….

William Makepeace Thackeray, Vanity Fair: A Novel Without a Hero, 1848

It’s a meeting that promises awkward handshakes, a “family photo” against a scenic backdrop and tense tête-à-têtes on the sidelines.

Claire Parker, "The G-7 summit kicks off on Saturday. Here are some key relationships to watch." Washington Post, August 23, 2019