SYNONYM OF THE DAY
Double your word knowledge with the Synonym of the Day!
SEE TODAY'S SYNONYM
Load More
Jun 30 bolide
Jul 02 repudiate
Word of the Day Calendar

a large, brilliant meteor, especially one that explodes; fireball.

What is the origin of bolide?

A bolide is a large, brilliant meteor that explodes before hitting the earth. The term comes from French, from Latin bolis (inflectional stem bolid-) “meteor,” from Greek bolís (stem bolíd-) “missile, javelin, flash of lightning, throw of a pair of dice.” The Latin sense “meteor” is first recorded by the Roman naturalist and encyclopedist Pliny the Elder in the first century a.d., perhaps from a resemblance between a fireball in the sky and a flash of lightning. Bolide entered English in the mid-19th century. 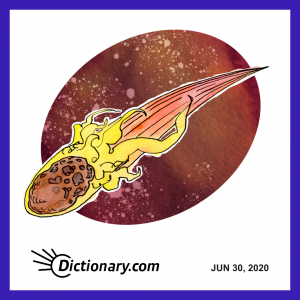 how is bolide used?

At exactly fourteen minutes after eight … the bolide passed overhead. It was an amazing spectacle. It left a trail of flame behind, across thirty degrees of sky.

Murray Leinster, Creatures of the Abyss, 1961

A meteor that explodes in mid-air before it hits the ground is known as a bolide. It’s thought that the high-pressure air in front of the falling meteor seeps into cracks in the rock, increasing internal pressure and causing the rock to break apart.