What is the origin of scherzando?

Scherzando, “playful,” is an adjective used in music. Like many musical terms, scherzando is of Italian origin, it being the gerund of the verb scherzare “to joke.” The noun scherzo, “a musical movement or passage of light or playful character,” is another derivative from the verb. Italian scherzare is most likely a borrowing from Middle High German scherzen “to jump for joy, enjoy (oneself).” Scherzando entered English in the second half of the 18th century.

how is scherzando used?

The scherzando character is expressed in rapid gestures high on the guitar, with mercurial changes of tone color, perilous slides, and abrupt silences.

After the opening section in the scherzando mood that Rachmaninov does so wonderfully, he presents us with this gorgeous melody.

SYNONYM OF THE DAY
Double your word knowledge with the Synonym of the Day!
SEE TODAY'S SYNONYM
Load More
Sep 03 verisimilitude
Sep 05 scherzando
Word of the Day Calendar 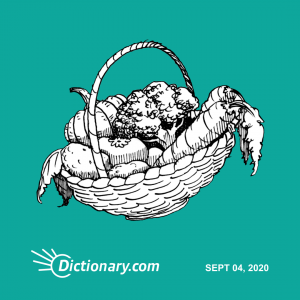 the appearance or semblance of truth; likelihood; probability: The play lacked verisimilitude.

What is the origin of verisimilitude?

Verisimilitude, “the appearance or semblance of truth; probability,” comes via French similitude from Latin vērīsimilitūdō (also written as an open compound vērī similitūdō), an uncommon noun meaning “probability, plausibility,” literally “resemblance to the truth.” Similitūdō is a derivative of the adjective similis “like, resembling, similar,” which governs the genitive case. Vērī is the genitive singular of vērum, a noun use of the neuter gender of the adjective vērus “true, real.” Vera, the female personal name, is the feminine singular of vērus and is related to the Slavic (Russian) female name Vera, which is also used as a common noun (vera) meaning “faith, good faith, trust.” The Latin and Slavic forms come from a Proto-Indo-European root wer-, werǝ-, wēr– “true, trustworthy.” In Germanic wērā became Vār in Old Norse, the goddess of faithful oaths. Verisimilitude entered English in the early 17th century.

how is verisimilitude used?

Every beast you see here, from elephant to elephant shrew, and every square inch of habitat, from desert sand to belching mud, is computer-created, and one can but marvel at the verisimilitude.

According to O’Brien, artificial intelligence will soon push the verisimilitude of computer-generated fake images and videos beyond what even skilled human editors can produce.