the responsible overseeing and protection of something considered worth caring for and preserving: New regulatory changes will result in better stewardship of lands that are crucial for open space and wildlife habitat.

What is the origin of stewardship?

Stewardship is a compound of the common noun steward “a manager of someone’s property or finances” and the native English suffix –ship, which denotes condition, office, or skill. From about the beginning of the 20th century, stewardship in many Christian denominations has acquired the sense “obligation for the responsible use of time, money, and talents in the service of God and of one’s neighbor.” Stewardship entered English in the 15th century. 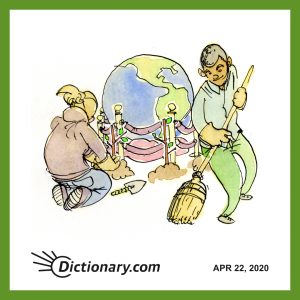 how is stewardship used?

As the 50th anniversary of Earth Day approaches—in a year that feels unsettlingly bleak—committing ourselves to more active Earth stewardship seems a logical, fitting and entirely necessary outcome.

Stewardship means, for most of us, find your place on the planet, dig in, and take responsibility from there—the tiresome but tangible work of school boards, county supervisors, local foresters—local politics. … Get a sense of workable territory, learn about it, and start acting point by point.

SYNONYM OF THE DAY
Double your word knowledge with the Synonym of the Day!
SEE TODAY'S SYNONYM
Load More
Apr 20 ambages
Apr 22 stewardship
Word of the Day Calendar

What is the origin of taradiddle?

Taradiddle (also tarradiddle), a slang term meaning “a small lie, a fib” has no clear etymology. The second element may be the verb diddle “to move back and forth or up and down quickly”; the first element tara– (or tarra-) has no explanation at all. Taradiddle (tarradiddle) entered English at the end of the 18th century.

“What are you?” “An engraver.” (This taradiddle I invented to account for the look of my hands.)

James Greenwood, "A Night in a Workhouse," Pall Mall Gazette, 1866

“A taradiddle is by definition a petty lie, a little falsehood or trifling told often to amuse or embellish a story,” he said. “As our world is full of them, seen and witnessed through advertising, P.R., propaganda, flirtations, staged events and presentations of all sorts, I simply came to the conclusion that even the straightest of photographs made in real-world witness was also such.”

Archaic. (used with a plural verb)

What is the origin of ambages?

The English noun ambages is usually used in the plural, just like its Latin original, ambāgēs. Both English and Latin nouns share the same meanings: “winding, roundabout paths; prolix, ambiguous, or equivocating language.” The Latin noun is a compound of the prefix ambhi– “around, about, both” (as in ambidextrous “able to use both hands equally well”), and a derivative noun of the hard-working verb agere “to lead, drive, act, do.” Ambages entered English in the early 15th century.

A city of monstrous size to which London was but a market town. Its ambages of streets bewildered.

few readers, we apprehend, will have the resolution to keep him company to the end of his book, or to follow him through the ambages of his descriptions, without occasional symptoms of weariness.