Save This Word!
An angle whose measure is between 0° and 90°. Compare obtuse angle.
QUIZ
GOOSES. GEESES. I WANT THIS QUIZ ON PLURAL NOUNS!
Test how much you really know about regular and irregular plural nouns with this quiz.
Question 1 of 9
Which of the following nouns has an irregular plural form?
cactus
wallet
goat
party
TAKE THE QUIZ TO FIND OUT

What is an acute angle?

An acute angle is an angle that measures between 90° and 0°, meaning it is smaller than a right angle (an “L” shape) but has at least some space between the two lines that form it. A “V” shape is an example of an acute angle.

An angle is the space between two intersecting lines or planes (surfaces), or the figure formed from such an intersection. Angles are usually measured in degrees (°). (These are not related to the degrees used to measure temperature.)

Acute angles are a basic concept of geometry with big applications. Engineering and architecture rely on a knowledge of angles and how to accurately measure them.

Why are acute angles important in geometry?

Have you ever used a protractor? If so, you probably remember that you used it to measure angles. The three basic kinds of angles are right angles, obtuse angles, and acute angles. If a basic geometric shape is made of straight lines (sorry, circles), it contains at least one of these three types of angles.

In a square, the four inside corners are the four angles of the square. These angles are all right angles (each measuring 90°). If you took one of these angles and moved one line closer to the other, narrowing the space between them, the angle would measure less than 90° and would be an acute angle. An angle that is greater than 90° is called an obtuse angle. If you kept widening the angle, it would eventually measure 180° and would look exactly like a straight line.

Understanding the difference between angles is one of the first lessons of geometry, and grasping this basic idea is the starting point for learning more complicated geometric concepts. Acute angles (and right and obtuse angles) are important in many fields that rely on geometry and the exact measurement of shapes. Just think about how many corners are in your house, and you’ll realize how crucial angles are to architecture.

What are the real-life examples of acute angles?

Once you recognize what acute angles look like, you’ll probably start noticing them in everyday objects. 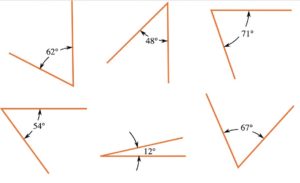 Drake hairline really used to be an acute angle??? 💀 https://t.co/gyHLB7gW0Z

What other words are related to acute angle?

An acute angle is an angle that is:

How to use acute angle in a sentence

An angle that measures less than ninety degrees but more than zero degrees. (Compare obtuse angle and right angle.)