[ chahy-oh-tee ]
/ tʃaɪˈoʊ ti /
Save This Word!
This shows grade level based on the word's complexity.
noun
a tropical American vine, Sechium edule, of the gourd family, having triangular leaves and small, white flowers.
the green or white, furrowed, usually pear-shaped, edible fruit of this plant.
QUIZ
WILL YOU SAIL OR STUMBLE ON THESE GRAMMAR QUESTIONS?
Smoothly step over to these common grammar mistakes that trip many people up. Good luck!
Question 1 of 7
Fill in the blank: I can’t figure out _____ gave me this gift.
who
whom
TAKE THE QUIZ TO FIND OUT
Also choyote.
Also called christophene, mirliton, vegetable pear.

What does chayote mean? 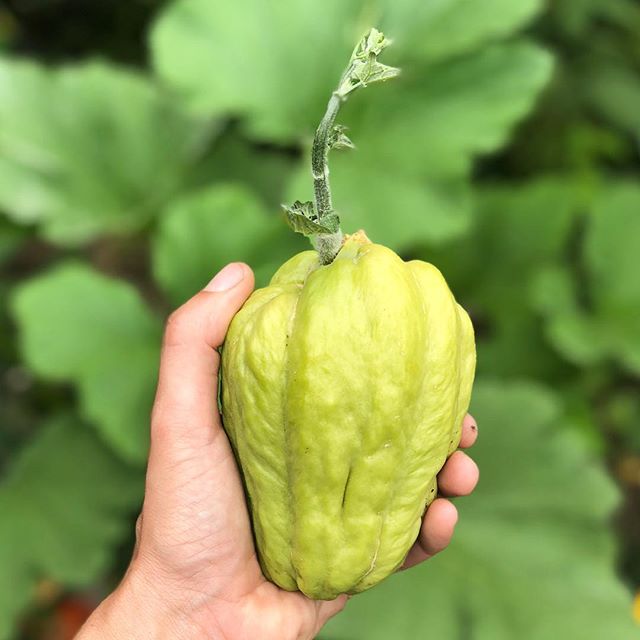 Where does chayote come from?

Chayote (Sechium edule) is a member of the gourd family Cucurbitaceae, native to Mesoamerica. Its common Spanish name is chayote, which derives from the Nahuatl word, chayohtli. It’s also known as mirliton squash.

Chayote was a staple in the diets of the ancient Aztecs and Mayans. European colonists later spread the plant to the Caribbean islands and Europe. Today, the plant is eaten all over the world and grown in various warm climates.

Chayote is described to have a mild taste, similar to a potato and cucumber. Raw chayote is often used in salads, while cooked chayote can be used in many dishes due to its weak flavor. Chayote is high in vitamin C, and its leaves are used to treat kidney disease and hypertension.

How is chayote used in real life?

Chayote is only successfully grown in a few southern U.S. states. Americans have been more exposed to the fruit in the 2000s thanks to immigration from Central America and supermarkets stocking less-common fruits and vegetables.

According to Pinterest, food trends for 2019 range from the familiar (mushrooms) to the obscure (chayote): https://t.co/SUF3ynS5k8 pic.twitter.com/votNO9L2Ns

In its native Central America, however, chayote is as common as it has been for centuries.

“Even in the heat of summer, Horacio Fuentes doesn’t need any shade in his Wilshire Park backyard. After all, he has a chayote. A seamless sea of green runs from the second-floor eaves of his house to the detached garage in the back, shading the entire length of the driveway.”
—Jeff Spurrier, Los Angeles Times, August 2012

How to use chayote in a sentence

chayote
/ (tʃɑːˈjəʊteɪ, tʃaɪˈəʊtɪ) /
noun
a tropical American cucurbitaceous climbing plant, Sechium edule, that has edible pear-shaped fruit enclosing a single enormous seed
the fruit of this plant, which is cooked and eaten as a vegetable