[ kling-ee ]
/ ˈklɪŋ i /
Save This Word!
See synonyms for clingy on Thesaurus.com
This shows grade level based on the word's complexity.
adjective, cling·i·er, cling·i·est.
apt to cling; adhesive or tenacious: a clingy fabric.
QUIZ
GOOSES. GEESES. I WANT THIS QUIZ ON PLURAL NOUNS!
Test how much you really know about regular and irregular plural nouns with this quiz.
Question 1 of 9
Which of the following nouns has an irregular plural form?
cactus
wallet
goat
party
TAKE THE QUIZ TO FIND OUT

OTHER WORDS FROM clingy

What does clingy mean?

A person who is overly attached to or emotionally dependent on another person can be described as clingy.

What are some other words related to clingy?

Where does clingy come from?

The word clingy is recorded in the early 1700s, originally used to describe objects that would literally cling to things. Clingy, referring to people, emerges by the late 19th century. In an 1896 issue of Munsey’s Magazine, for instance, a woman describes more delicate peers, said to depend on men to provide for them and save them from snakes and wild animals, as “Clingy Vine” women. This use helps illustrate the evolution of clingy from literal, physical clinging to metaphorical, emotional kinds.

In his work on attachment theory in children in the 1970s, Dr. John Bowlby described children who were too emotionally dependent on their parents as acting clingy, unwilling to be separated from them. Bowlby’s work contributed to the wider field of psychology and helped parents to manage clingy children (and maybe even vice versa).

Describing romantic partners, typically boyfriends or girlfriends, as clingy takes off at least by the early 1990s. Online around this time, people were comparing clingy partners to toddlers and pets who displayed similar behavior.

How is clingy used in real life?

Children and partners are often described as clingy. When used about children, clingy is often discussed as a phase for toddlers. When used about partners, clingy tends to be a negative term more often issued as a complaint against girlfriends who need too much attention.

Be mindful that clingy can be considered a gendered term and potentially sexist stereotype, and it may appear alongside needy or high-maintenance. (Men may be described as possessive, controlling, or jealous for similar behaviors.) A popular 2012 meme, Overly Attached Girlfriend, memorably parodied clingy behavior, especially as it spilled over into the creepy. 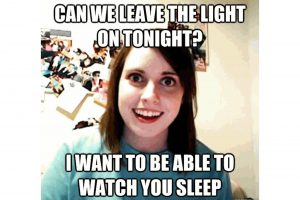 “He got more possessive and more clingy towards her, and wouldn’t let her do certain things.”

How to use clingy in a sentence