[ fyood l sis tuhm ]
/ ˈfyud l ˌsɪs təm /
Save This Word!
This shows grade level based on the word's complexity.
noun
the political, military, and social system in medieval Europe, based on the holding of lands in fief or fee and on the resulting relations between lord and vassal.
a system of political, economic, and social organization similar to the system in the Middle Ages: The emancipation of the serfs in 1861 under Alexander II signaled the end of the feudal system in Russia.
QUIZ
QUIZ YOURSELF ON AFFECT VS. EFFECT!
In effect, this quiz will prove whether or not you have the skills to know the difference between “affect” and “effect.”
Question 1 of 7
The rainy weather could not ________ my elated spirits on my graduation day.
affect
effect
TAKE THE QUIZ TO FIND OUT
Meet Grammar Coach

What is a feudal system?

A feudal system (also known as feudalism) is a type of social and political system in which landholders provide land to tenants in exchange for their loyalty and service.

Feudalism prevailed in the Middle Ages in Europe and Japan and generally involved a lord (the landowner) allowing vassals (tenants) to rent the land by providing services, especially military service. The parcel of land, called a fief, was typically worked by serfs, laborers who had very few rights and were bound to the land itself.

The term feudal system is often used in a much more general way in political rhetoric to indicate an outdated, exploitative system of government. This usage may or may not actually refer to relationships that don’t look anything like historical feudal systems.

How does a feudal system work?

The feudal system developed in Europe when the decline of the Roman Empire led to a fragmentation of power, which in turn allowed wealthy landowners to strengthen their control over the people living on their land. But they didn’t call it a feudal system at the time. The term feudal system was introduced much later, in the 1700s, by scholars studying the complex legal and political relationships of the Middle Ages.

The word feudalism may call to mind images of lowly peasants toiling for haughty nobles, but the relationships in such systems were more complex than that. At the top of the hierarchy in the feudal system was a king, who traditionally owned all land and granted it directly to noblemen, known as lords, who held hereditary rights to it. Their tenants, called vassals, swore loyalty to the lord and provided military service (yes, knights in shining armor). Working the land (doing the actual farming) at the very bottom of the hierarchy were peasants called serfs. Serfs were not free to work elsewhere or go wherever they pleased—if the land passed from one owner to another, the serfs were then required to work the land for that new owner. And they were required to get the lord’s permission to do just about anything, including getting married or traveling off of the land.

Feudalism wasn’t limited to medieval Europe. Japan operated under a feudal system from the 1100s to the 1800s under powerful military leaders called shoguns, whose vassals, called daimyo, controlled armies of samurai. At the bottom of the hierarchy were farmers and merchants.

While such systems essentially no longer exist, the term feudal system is still often heard in political discourse as a negative term for unfair forms of government. This usage doesn’t usually refer to the actual structural complexities of feudalism, but rather is intended to draw a comparison based on how unequal and unjust such systems were.

The word feudal comes from the Latin and is related to fee and fief. Perhaps surprisingly, feud (as in, a long-running dispute between two families) is unrelated.

What are real-life examples of feudal system?

The relationships that made up the feudal system can be represented in a pyramid-shaped hierarchy, as shown in this graphic. 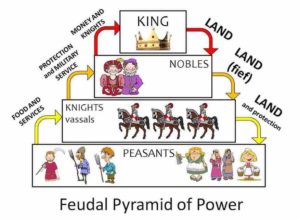 #leaseholdscandal @BorisJohnson @EstherMcVey1 @RobertJenrick @Conservatives – The Conservatives must not be influenced by large donations from their property industry sponsors, release 6 million leaseholders from this feudal system !

What other words are related to feudal system?

A. Supply and demand.
B. The exchange of land for services.
C. Agricultural subsidies.
D. Parliamentary rule.

How to use feudal system in a sentence