Save This Word!
This shows grade level based on the word's complexity.
noun
psychological struggle within the mind of a literary or dramatic character, the resolution of which creates the plot's suspense: Hamlet's inaction is caused by internal conflict.
mental struggle arising from opposing demands or impulses.
QUIZ
ARE YOU A TRUE BLUE CHAMPION OF THESE "BLUE" SYNONYMS?
We could talk until we're blue in the face about this quiz on words for the color "blue," but we think you should take the quiz and find out if you're a whiz at these colorful terms.
Question 1 of 8
Which of the following words describes “sky blue”?
navy
beryl
azure
TAKE THE QUIZ TO FIND OUT
Meet Grammar Coach

What is an internal conflict?

Internal conflict is a struggle within a person’s mind over a problem or question. That’s why it’s called internal.

External conflict is when a person (or group) fights with something else outside of themselves. For example, a person may have conflict with an entire society, that’s external conflict. Think of To Kill A Mockingbird: Atticus Finch is fighting against the structural racism of his entire town.

Other types of external conflict are “Person vs. Environment” (Life of Pi), “Person vs. Supernatural” (Ghostbusters), and “Person vs. Machine” (The Terminator).

However, with internal conflict, there’s only one version: “Person vs. Self.” Internal conflict is a struggle within the self, not a struggle against an outside force. The archetypal image of this conflict is a person with an angel on one shoulder and a devil on the other, with the devil telling them to do the bad thing and the angel telling them to do the good thing.

Think about the movie The Emperor’s New Groove, where Kronk’s internal conflict is literally represented by tiny angel-and-devil costumed versions of himself. 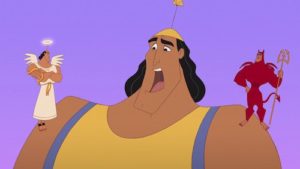 What are real-life examples of internal conflict?

Internal struggles of this kind are peppered throughout pop culture too, since they’re important parts of character development. The moment in the Lord of the Rings series where Frodo can’t decide whether to go to Gondor with Boromir or straight to Mordor is internal conflict. Every time Spock wrestles with the existence of his own emotions in Star Trek: The Original Series, that’s an internal conflict too. And, in the Lion King, when Nala finds Simba and tells him he must return to Pride Rock, his dilemma over whether to go back or not is internal conflict.

In everyday life, we might encounter moral or ethical dilemmas that we have trouble resolving and feel conflicted about. In these cases, we can describe this as our own internal conflict about a concept or problem.

It’s hard to talk about the acute sense of internal conflict I feel right now. I loathe my body, not for how it looks, but for what it is unable to do. I am a feminist. I know my worth is not measured in my ability to have a child. And yet…https://t.co/QiCWaYPwRp pic.twitter.com/yHEA2qVdbh

Internal conflict can also be used more broadly to describe problems within a whole organization or nation, not just a single person. In that case, it means that the people inside the organization are fighting with each other. This is a little bit different than the literary use, but the basic connotations of “problems coming from inside, not outside” remains the same.

It is also dealing with the world's 2nd biggest food crisis, fueled by internal conflict.

How to use internal conflict in a sentence