Save This Word!
This shows grade level based on the word's complexity.
noun
the principle that when a ray of light, radar pulse, or the like, is reflected from a smooth surface the angle of reflection is equal to the angle of incidence, and the incident ray, the reflected ray, and the normal to the surface at the point of incidence all lie in the same plane.
QUIZ
WILL YOU SAIL OR STUMBLE ON THESE GRAMMAR QUESTIONS?
Smoothly step over to these common grammar mistakes that trip many people up. Good luck!
Question 1 of 7
Fill in the blank: I can’t figure out _____ gave me this gift.
who
whom
TAKE THE QUIZ TO FIND OUT

Words nearby law of reflection

MORE ABOUT LAW OF REFLECTION

What is the law of reflection?

While it may sound like a form of meditation, the law of reflection is a principle about what light does when it hits a perfectly smooth surface, like a mirror.

The law states that light will bounce off such a surface at the exact same angle it hit that surface at.

Why is the law of reflection important in physics?

In everyday life, a law is a rule we have to follow—or else we may face consequences. Reflection is when we think back on something to consider it more deeply.

But in fields such as science, engineering, and philosophy, a law is a statement about something that holds true in all situations—for example, Newton’s laws of motion. In physics, reflection is when light, sound, or other types of energy hit and bounce off of a surface (reflects). The word reflection comes from a Latin word literally meaning “a bending back.”

So, according to the law of reflection, when a ray of light hits a perfectly smooth surface, such as a mirror or polished metal, it bounces off that surface at an equal angle it came in.

These two angles are measured relative to what’s called the normal, or a line perpendicular (at a right angle) to the surface. 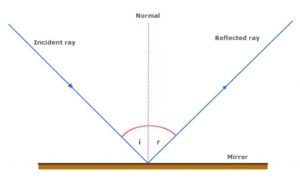 But what happens when light encounters a rough surface, like, say, sandpaper? It still reflects, or bounces off, but it scatters in many directions. This is called diffuse reflection, and when this happens, the angles of incidence and reflection aren’t equal.

What are real-life examples of law of reflection?

The law of reflection has been described since at least Hero of Alexandria in the first century AD. Hero (also known as Heron) was a remarkable mathematician and mechanical engineer whose many inventions include an early (perhaps the first) vending machine, which dispensed holy water when a coin was deposited.

Today, the law of reflection is considered a fundamental principle in the branch of physics known as optics, which deals with the behavior of light. Scientists, mathematicians, and engineers working with other forms of radiation, such as sound or microwaves, may apply the law of reflection in work with such things as acoustics or x-rays. Technicians at concert light shows and performers of magic acts may use the law of reflection to dazzle us with their spectacles and illusions.

Love an installation that puts the Law of Reflection as implied by Maxwell's equations to good use. pic.twitter.com/wDv0Frg4bZ

How to use law of reflection in a sentence