Save This Word!
This shows grade level based on the word's complexity.
noun Mathematics.
any transformation, as a translation or rotation, of a set such that the distance between points is preserved.
QUIZ
WILL YOU SAIL OR STUMBLE ON THESE GRAMMAR QUESTIONS?
Smoothly step over to these common grammar mistakes that trip many people up. Good luck!
Question 1 of 7
Fill in the blank: I can’t figure out _____ gave me this gift.
who
whom
TAKE THE QUIZ TO FIND OUT

What is rigid motion?

Rigid motion is a movement of a set so that the distance between points doesn’t change.

In math, a set is a group of objects or elements. In a triangle, for example, the set consists of the three points and three line segments that combine to form the triangle.

In rigid motion, the position or orientation of the set as a whole changes without the distance of the line segments changing. For example, a triangle will turn or slide, but it won’t stretch or squeeze.

There are three basic types of rigid motion. The first is translation, that is, a slide. Put a pen on your desk. Now slide the pen to the left, to the right, up, down, and diagonally. The pen has changed position but its length and width haven’t changed.

The next is rotation, that is, a turn. Let’s say you spin that pen around on your desk so the point is facing a different direction. The pen (the set) has changed orientation, but its length and width have stayed the same.

Why is rigid motion important?

The term rigid motion has been used in geometry since at least the 1840s. Rigid motion is a basic idea of Euclidean geometry, so the idea could be traced all the way back to the mathematician Euclid, who lived during the 300s B.C.

It is possible to combine the different types of rigid motion to make even more complex transformations. For example, you can perform a reflection followed by a translation. The starting and ending figures would be like footprints, in which one figure is a mirror of the other and is also slightly higher or lower than the other, similar to prints of right and left feet.

Rigid motion is used to introduce students to geometry and helps explain why the math works. For example, you can use the Pythagorean theorem to calculate the length of an unknown side of a triangle, and this value will not change no matter how the triangle is rotated or flipped.

The alternative to rigid motion is non-rigid motion. In non-rigid motion, the size or shape of the object changes. For example, a small triangle might increase in size to become a much larger one, or the triangle may stretch out and become taller or wider.

What are real-life examples of rigid motion?

This diagram demonstrates the three basic types of rigid motion. 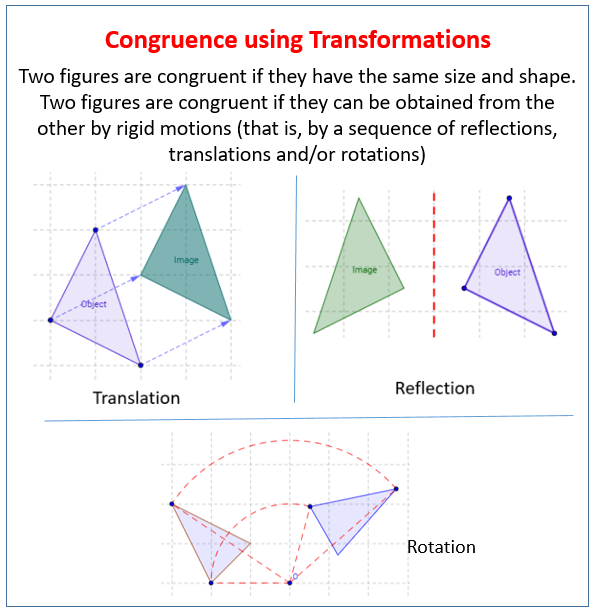 Rigid motion is used to introduce students to the basics of Euclidean geometry.

What other words are related to rigid motion?

During rigid motion, the size or shape of a figure might change.

How to use rigid motion in a sentence