What does AITA mean?

AITA stands for Am I the Asshole? On social media, people ask AITA when sharing personal disputes in which they are unsure if they’ve acted they like an asshole—that is, been mean, selfish, or wrong in some way. Other people then offer their opinion on that person’s behavior. AITA was popularized by and is widely used in reference to r/AmITheAsshole, a Reddit forum dedicated to this activity.

Where does AITA come from? 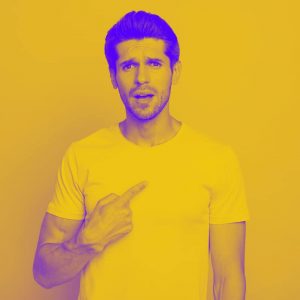 Let’s start with the basics: When not referring to the body part, asshole is a vulgar slang word for “a stupid, mean, or contemptible person.” Being an asshole, as we popularly use the term, typically and specifically implies selfish or inconsiderate behavior.

The subreddit r/AmITheAsshole was created in June 2013 by user u/flignir. The forum describes itself as: “A catharsis for the frustrated moral philosopher in all of us, and a place to finally find out if you were wrong in an argument that’s been bothering you. Tell us about any non-violent conflict you have experienced; give us both sides of the story, and find out if you’re right, or you’re the asshole.”

Using the abbreviation AITA for Am I the Asshole? can be found in the subreddit’s earliest posts. According to the forum’s rules, users have to title their posts with AITA or WIBTA (the hypothetical Would I Be The Asshole?) followed by a description of their conflict. Conflicts range in seriousness—and perceived jerkishness. To get a flavor for AITA disputes, here are some of the most popular posts from 2019:

Others rules on the forum govern content (e.g., disputes can’t be violent in nature or about breakups), user behavior (being civil to each other), and purpose (not seeking advice, focusing on passing moral judgment). To pass judgment, users respond with the following conventions, with an explanation of their reasoning.

In 2016, the abbreviation AITA spread on Twitter, often used with a link or reference to r/AmITheAsshole. After being featured on the homepage of Reddit and discussed in popular media, r/AmITheAsshole exploded in popularity, surged to nearly 2 million as of February 2020.

AITA for not wanting to fix my friend's car a second time?

AITA for asking my 5 year old daughter to lend me $ for gas? https://t.co/MuWzq4RbYj pic.twitter.com/XRnOECWMbX

Queries range from the gloriously petty (AITA for ordering jalapenos on my pizza intentionally to stop my wife eating it?) to the seriously heavy (AITA for firing an employee after his parents died?).
Victoria Turk, Wired, June 2019
If Downhill is a feature-length AITA post, Zach and Rosie are the commenters, arguing over who's in the right and who's in the wrong and revealing as much about themselves in the process.
Angie Han, Mashable, January 2020

Thanks to the popularity of the r/AmITheAsshole subreddit, AITA has spread as a more general convention for getting feedback on personal conflicts and disputes social media. That said, AITA is still widely used a shorthand for the forum as well as an instance of an AITA post and discussion.

This AITA addresses an issue I see a LOT in writing communities (and also on twitter): this complete and utter disdain for people who write certain books for money and not "tHe ArtE". I will die on the hill of passion projects any day of the week, but bills still need to be paid. https://t.co/geBnLsBRND

One of these days there's going to be a big magazine profile outing the writer who's behind like 27% of all viral r/relationships, AITA etc. posts, and it's going to be a fascinating read.

The activity of AITA has become common enough that some people post AITA? or #AITA on its own at the end of a description of their episode. And AITA, naturally enough, can stand in for am I the asshole anywhere that phrase is needed in a sentence.

So I agreed to give a talk at a local conference, take time away from my family on a Sat., forgo my usual speaker's fee, donate my small honorarium to charity, & today was asked to pay to register for the conference. Now thinking of bailing. Thoughts appreciated. AITA? #MedEd

Was discussing politics with our kids over dinner the other night and his came up.
I managed to control myself and didn't thank them and their future kids for paying for all the free shit we've given away the last 3 generations. On second thought, maybe that was rude of me? #AITA https://t.co/CD4st891xZ

Keep in mind, of course, that asshole is vulgar slang, so AITA may be not be appropriated in polite or formal settings. Also keep in mind that AITA can stand for many other things, such as the All India Tennis Association.

This is not meant to be a formal definition of AITA like most terms we define on Dictionary.com, but is rather an informal word summary that hopefully touches upon the key aspects of the meaning and usage of AITA that will help our users expand their word mastery.