What does IMAO mean?

IMAO is an internet acronym for in my arrogant opinion and is usually used with a sense of irony or self-deprecation.

sorry not sorry, truth be told, One does not simply, ROTF, KMSL, ctfu

Where does IMAO come from? 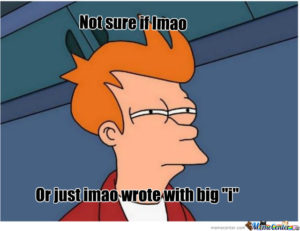 IMAO is a twist on IMHO, or in my humble opinion. One early IMAO comes from a May 1989 Usenet discussion about the jam band The Grateful Dead. The user, named David Vinayak Wallace, begins a post with: “OK then, let me cast some kerosene onto the fire. IMAO this is how I would rate” various periods of the band’s history.

Mr. Wallace then includes a postscript at the end of his post explaining that IMAO means in my arrogant opinion to avoid “30,000 messages” asking what it stands for.

Through 1989, IMAO and in my arrogant opinion was used 8 times in Usenet groups, always in debates and arguments. Several conversations involved complete dismissal of an opposing viewpoint, one even accusing the opponent of being homophobic. From its start, IMAO was used with irony but also with some force. By 1993, IMAO was widespread in Usenet groups, again usually used in hot topics.

If I enjoy doing something and I’ve to stop it to look matured naah bruh I’m fine looking immatured if I’m actually enjoying it imao.

IMAO spreads online, and becomes more mild in tone, in the 1990s and 2000s, but it never quite took off like its counterpart, IMHO. That’s likely in part because in my arrogant opinion is 1) not a stock phrase in English and 2) is not something a debater usually like to admit in an argument.

Bondia all, wake up to AIR's finest moment 'Premiers Symptomes'. Classic ambient album. IMAO.
@sekott, August, 2011
The United States is less prepared for what may be coming than most people realize. At least it's 60/40 that I'm wrong IMAO.
@NateAgapi, July, 2009

In contemporary online usage, IMAO is often a misspelling of another internet acronym, LMAO, laughing my ass off. That’s because lowercase L (l) is easily confused for a capital I in sans serif fonts.

Imao. are you a mind reader?

When IMAO is used intentionally, it is almost always used in a self-deprecating manner, humorously undermining someone’s opinion or characterizing it as ultimately trivial. Use of IMAO can also suggest, though, that one’s opinion on the matter is more strongly held.

just me but ryan's taller than everyone it seems imao

my wallet is the cutest imao 💞 pic.twitter.com/pG4kcJsPNT

Imao it's true, but what do you think about this guys? pic.twitter.com/Ask2dTYL50

This is not meant to be a formal definition of IMAO like most terms we define on Dictionary.com, but is rather an informal word summary that hopefully touches upon the key aspects of the meaning and usage of IMAO that will help our users expand their word mastery.