What does 🥕 Carrot emoji mean?

The carrot emoji depicts a bright orange carrot with a green leafy top.

In texting, it can sometimes take on a more sexual meaning, which means it might not be the best emoji to text to a new friend. Wait a day.

Where does 🥕 Carrot emoji come from? 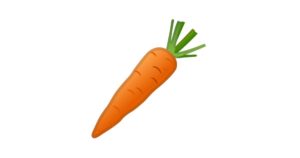 Aside from being the constant sidekick to a certain bunny … Bugs Bunny, carrots are a root vegetable thought to have originated in Persia. They were originally grown for their seeds and leaves, and some of their relatives—cilantro, coriander, fennel—are grown today for that reason. Carrots grow mostly underground, and the part we eat is called the taproot, the main root of an organism. Now you know facts about carrots. Awesome.

Today, the carrot often represents healthy eating. Also, today, in the world of texting and sexting and digital media, almost any food item with a tubular or cylindrical shape also takes on a second meaning … we’re so clever.

What’s your go-to for getting a nutrition hit?! 🥒🍏🥕 Love me some @gingerjuiceco. Guiltless greens and tumeric shot 💪🏼
@MissyBaneFDNP, November, 2018
All about the carrot cake 😋🥕 #NationalCakeDay
@Antondutwat, November, 2018
Our tokki came out of his burrow🐰🥕
@RealUnkle1932, November, 2018
SEE MORE EXAMPLES

In social media, the carrot emoji is often seen in posts about food and healthy eating, about gardening, and … carrots as well as the cute things they do when they think we’re not looking.

The carrot emoji is seen in posts for the popular Kevin the Carrot animated character, winning hearts all over the UK.

I just made my own with needle felting :) 🥕 pic.twitter.com/qnOWBKvvb2

Some people are just … crazy for carrots.

The carrot emoji is also used in posts about true love, crushes, bunny rabbits, and cute things in general.

This is not meant to be a formal definition of 🥕 Carrot emoji like most terms we define on Dictionary.com, but is rather an informal word summary that hopefully touches upon the key aspects of the meaning and usage of 🥕 Carrot emoji that will help our users expand their word mastery.