What does 👻 Ghost emoji mean?

The Ghost emoji 👻 depicts a cartoonish looking figure in white, shaped like a teardrop or bubble with arms and round black spots for eyes.

It usually pertains to scary things and, of course, to Halloween. In texting, it can mean that someone is not feeling like themselves, they are feeling inconsequential or invisible; it can mean, “hey, boo;” and it can mean the texter finds something to be surprisingly creepy.

Where does 👻 Ghost emoji come from? 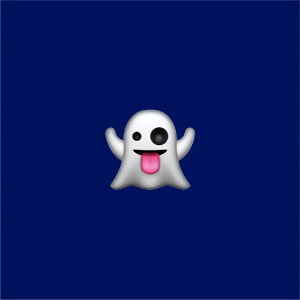 Don’t be haunted by the many ways the Ghost emoji 👻 is used! Ghosts represent all kinds of things—the past, the unknown, people who have died, people who want to be invisible, premonitions or “feelings,” paranormal events, and more. There are even a whole bunch of words for the … thing: specter, spirit, spook, ghoul, phantasm, apparition, wraith, and poltergeist, to name a few.

So basically we needed the Ghost emoji 👻 … bad. It was approved as part of Unicode 6.0 in 2010 and added to Emoji 1.0 in 2015. In most platforms, it’s shown smiling, and, for some reason, its tongue is usually hanging out. (The Google ghoul is actually winking … boo!)

Just when I think I can't roll my eyes any harder... 🙄💥💀👻
@jdscroggin, June 14, 2018
Treat yourself to some spooky books! Stop by the library to check out our October library display! 👻 🎃 @GFC_Activities #OnwardCentral
@gfclibrary, October 9, 2020
— currently watching: the haunting of bly manor 👻
@anniesdison, October 9, 2020
SEE MORE EXAMPLES

The Ghost emoji 👻 is used, of course, in relation to Halloween, but it’s also used in posts about things that are scary or unsettling. Like horror movies. Or tattoos.

In texting, it can mean that someone is not feeling like themselves, they are feeling inconsequential or invisible; it can mean, “hey boo,” and it can mean the texter finds something to be surprisingly creepy.

What’s on your Halloween @SFbucketlist!? Happy Halloween to the Bay Area…Incredible vid by @justinleduc ☠️👻

Now, I’m watching #theenchantedforest epid. Not a kid anymore but I wanna go there. @GhostAdventures 👀👻😈😱🐉🐰🐺🦄 pic.twitter.com/1NOqV3Vc1q

Staying in the UK’s oldest hotel & trying not to think about the ghost potential. @MaidsHeadHotel 👻 pic.twitter.com/u5KFFgYGtZ

I started with the most craziest abandoned buildings i've ever explored! Today is an old Abandoned Mansion from the French Civil War and @i_am_joshyo explored this mansion to as well. 100 likes and i'll drop the 3 AM challenge this week of this place!➡️https://t.co/y184r0Ml72👻 pic.twitter.com/ujeq0deIuM

Booking a trip to Salem for Halloween😍🙌🏼🎃👻

It’s used in posts about cute (but maybe a little naughty) pooches, too.

This is not meant to be a formal definition of 👻 Ghost emoji like most terms we define on Dictionary.com, but is rather an informal word summary that hopefully touches upon the key aspects of the meaning and usage of 👻 Ghost emoji that will help our users expand their word mastery.