What does 🏇 Horse Racing emoji mean?

The Horse Racing emoji 🏇 depicts a jockey riding a racehorse. It is commonly used to refer to horse racing, races, or fast speed . It is often used alongside the Horse 🐎 and the Horse Face 🐴 emoji. The Horse Racing emoji 🏇 is used more frequently leading up to and during prominent horse races, such as the Kentucky Derby held annually on the first Saturday in May (May 1 in 2021).

Where does 🏇 Horse Racing emoji come from? 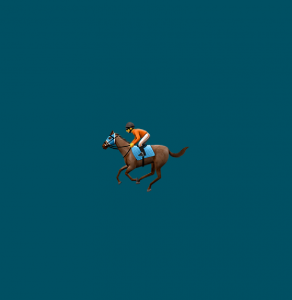 The Horse Racing emoji 🏇 was approved under Unicode 6.0 in 2010. On most major platforms, the emoji resembles a jockey riding a brown racehorse while facing to the left. Depending on the platform, the emoji ranges from appearing realistic to stylized. The colors of the horse, the jockey’s clothing, and the horse’s racing equipment vary by platform. The horse lacks a saddle in the Google, Samsung, Microsoft, and Facebook versions of the emoji. On Apple, Twitter, and Facebook, the horse is wearing a racing mask.

The Horse Racing emoji 🏇 is most often used to refer to horse racing.

Off to the races tomorrow will be rolling in the money with my winnings … £1 each/way on all races 🏇🏇 not much of a gambler just a great day out.

Some unbelievable racing today! So good to watch🏇 #Cheltenham

Haven’t got caught up in the #CheltenhamFestival buzz this year like other years but that was absolutely class to watch Honeysuckle and Rachel Blackmore in full flight! 🏇