What does 🏩 Love Hotel emoji mean?

Oh, boy. This emoji has two distinctly different ideas behind it.

The love hotel or heart hospital emoji depicts a building with both a pink heart and on some platforms the letter H emblazoned on the front. It is mostly used in reference to hospitals and health as well as to vacation resorts. Those uses are far from the reported original intent, which was to indicate a house of ill repute (i.e., a bad reputation).

Where does 🏩 Love Hotel emoji come from? 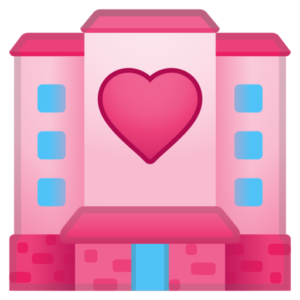 When the love hotel or heart hospital emoji  was created and approved as part of Unicode 6.0 in 2010 , it apparently meant a hotel where rooms may be rented by the hour, for … love. By the time it was added to Emoji 1.0 in 2015, the use had shifted.

Maybe it’s the letter H atop the building or the sweet pink heart over the entrance. It might be the fact that it actually looks a bit like the hospital emoji seen here 🏥, depending on your viewing platform.

Whatever it is, this is one of the most misused emojis we’ve come across; instead of being used to refer to a “love hotel,” it often just references hospitals and health care. It’s also used to mean a romantic resort or vacation getaway.

So … a hotel for prostitution? Not so much. That’s why the love hotel emoji now has a second name: the heart hospital emoji.

Ya girl is officially starting nursing school next month !!!!👩🏻‍⚕️🏩🎉
@laughinglia, September, 2018
I GOT MY PRECEPTORSHIP IN PEDIATRICS!!! 👧🏼💕👦🏻🏩💉
@littlelo_diego, September, 2018
I just have so much to look forward to and such a bright future ahead of me, accompanied and supported by people I love. I could not be happier over here 💓🏩😇🌻🌟
@veronica0vaughn, September, 2018
SEE MORE EXAMPLES

It’s fun seeing the love hotel emoji used to mean things other than what it was intended for. Or, maybe we just have a twisted sense of humor.

At any rate, here, the intent is clearly a medical reference:

Quick #CarFreeDayIndy recap with Gene Berry of @OneAmerica – we took the Monon from 54th. Easy in and at cross points with major Indy roads saw courteous drivers so, thankfully no 🚗 v 🚲 🚨 or 🏩today! pic.twitter.com/mfrpjwCwkq

Likely outcomes of a 'no-deal' #Brexit:

This Instagram user means to imply a spa with this emoji:

We’re pretty sure this historic resort in the Poconos is not used for prostitution:

Six Historic Lodgings in the Pocono Mountains ⛰🏩 https://t.co/CTD4st7pDa by @PoconoTourism

And here, the intent is probably for a romantic get-away.

We’re really not sure of the intent here:

So, as you can see, the love hotel emoji is a lot of things, but we’d say its current use is not what the emoji’s creators intended. Guess you don’t need to say “whore house” very often in texts …

This is not meant to be a formal definition of 🏩 Love Hotel emoji like most terms we define on Dictionary.com, but is rather an informal word summary that hopefully touches upon the key aspects of the meaning and usage of 🏩 Love Hotel emoji that will help our users expand their word mastery.