What does slut-shaming mean?

Slut-shaming is the practice of disparaging women, and occasionally men, for acting in a manner that violates “norms” regarding sexually appropriate behavior. These denigrations, which are often double standards, range from criticizing women for wearing sexy clothing or having multiple sexual partners to blaming sexual assault and rape survivors for their attacks.

Where does slut-shaming come from? 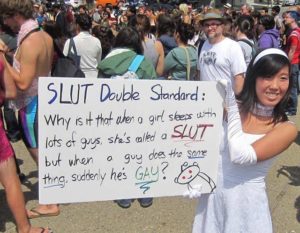 While evidence for the phrase slut-shaming can be found in a 1998 sci-fi novel, the actual practice is ancient. For instance, we can find some very strong language used against sexually-active women, often by women, in 17th-century English court records, even if they didn’t call it slut-shaming back then.

Why? Perhaps because a slut, first evidenced in the 1400s, historically referred to a messy women or impudent girl, with its “sexually promiscuous” connotation taking off in the 20th century. And shaming (e.g., fat-shaming or body-shaming), takes off as a combining form in the 2000s.

Writing for American Speech, lexicographer Ben Zimmer dated the phrase slut-shaming to a 2006 blogpost about roller derby on the feminist blog I Blame the Patriarchy. He found the phrase in a comment: “[I]s it your contention that some previous posts offering blanket criticism of the roller-derby indulge in a bit of glorified slut-shaming?”

The term cropped up in debates about legalizing sex-work in the 2010s as some feminists accused peers of not supporting their sex-working sisters. Writing for the libertarian website Reason in 2008, writer Kerry Howely notably critiqued anti-legalization: “None of the slut-shaming makes sense unless you assume women live to give themselves to men in their purest possible form.”

The term slut-shaming spread in part because of the SlutWalk. SultWalks began in 2011 in Toronto after a police officer giving a rape prevention talk told students at York University that they could protect themselves by “not dressing like sluts.” Students responded by marching in all manner of dress and carrying signs identifying themselves as sluts, all to protest the idea that women’s behavior is the cause of their sexual assault. 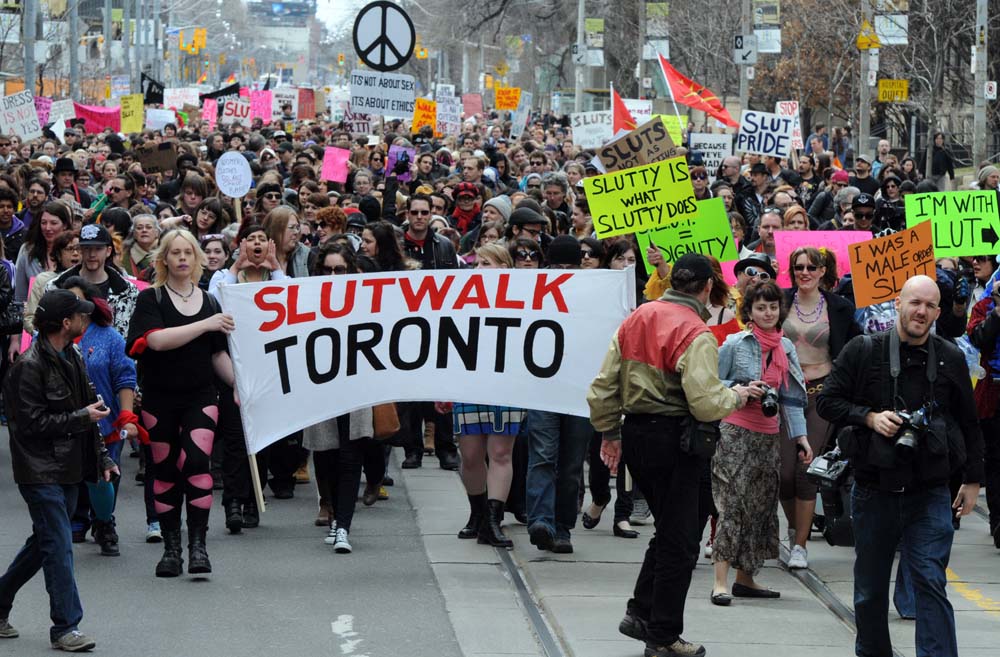 The Toronto event inspired SlutWalks around the world, and coverage of the SlutWalks helped popularize the phrase slut-shaming. For example, in an article about the 2011 SlutWalk in New York City, reporter Rebecca Nathanson wrote in The Village Voice: “Most were more than willing to vent their frustrations about victim-blaming and slut-shaming.”

Actor and model Amber Rose powerfully spoke out against slut-shaming at a speech at the 2015 SlutWalk in Los Angeles, saying she experienced it for having worked as a stripper and engaging in casual sex.

Slut-shaming is also prominent in discussions of school dress codes that target girls. Writing for Hello Giggles in 2016, feminist blogger Rachel Sanoff observed: “Teenage girls are frequently subjected to slut-shaming dress codes—sexualizing them without their consent, and prioritizing the apparently ‘uncontrollable’ hormones of teenage boys over a girl’s ability to comfortably receive an education.”

Slut-shaming has also expanded to the gay community, particularly among gay men. In 2016, a meme circulated that compared past and present Gay Pride parades, suggesting contemporary ones as sex parties, not forms of activism. Writing for queer-oriented news site Pride, Raffy Ermac wrote: “Many see the meme as a form of slut-shaming in the way it pits LGBT protestors against two men dancing together in public, and what many commenters on the internet argue is that openly expressing your sexuality and protesting your rights as a queer person to be free and equal aren’t mutually exclusive of each other.” 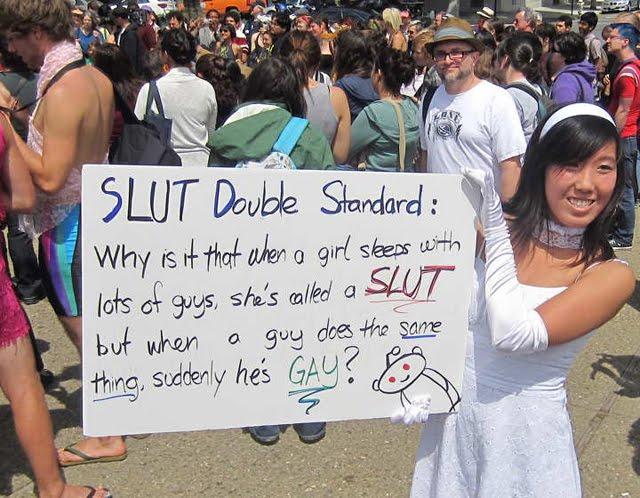 But, some are trying to reclaim the word slut … maybe it’s working?

WATCH: Slut: From Dirty to Empowering

slut shaming needs to stop! an outfit that shows stomach, under boob, side boob, back, booty, lots of leg, etc. does NOT make someone a slut or a hoe or a whore. let them rock it if they're confident enough to wear it plz & thx.
@kaylacole_14_, July, 2018
If you are a woman who stands up for your rights, you are a slut and your parents should be ashamed of you and we should all have the right to view your se­­x tapes online. This type of despicable behavior is part and parcel of a time-worn tradition of Slut-Shaming. When women step out line, they are demeaned and degraded into silence.
Krystal Ball, HuffPost, March, 2012 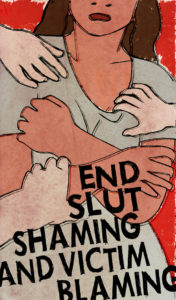 Feminists—and other decent people—use slut-shaming to call out the ways woman are variously made to feel guilty or wrong about their sexuality. It’s often a double standard, in that men, for example, aren’t criticized for having multiple sexual partners in the way that woman are.

I'm against the despicable act of slut-shaming. You hardly (if ever) witness a man being slut-shamed, so why is it okay to police what a woman is wearing? And there's also that double-standard where if a woman does dress conservatively, she's 'prudish'. #JustCantWinWithSomePeople

More heinously, slut-shaming may victim-blame women for sexual assault or rape when people claim such things as “She was asking for it,” referring to a sexily dressed woman drinking at party. 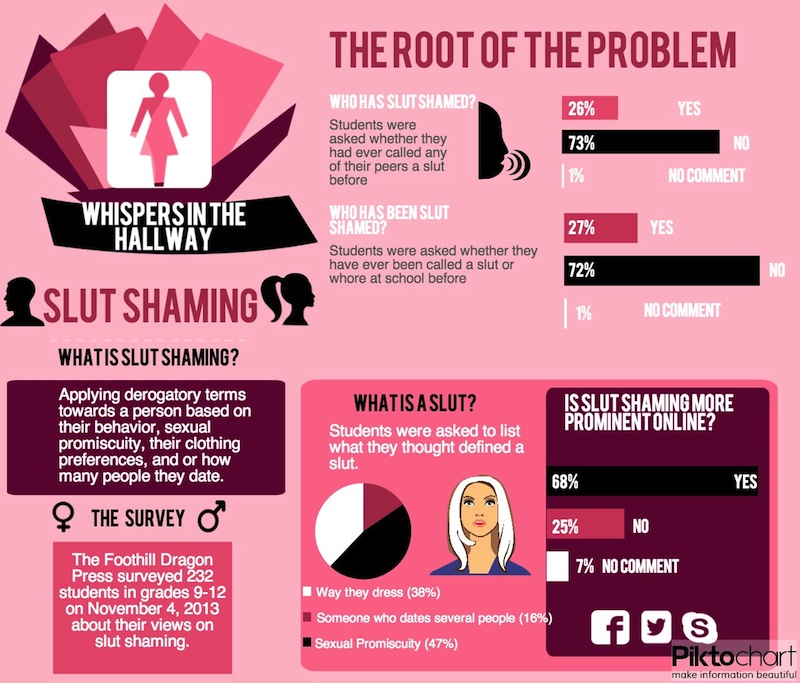 This is not meant to be a formal definition of slut-shaming like most terms we define on Dictionary.com, but is rather an informal word summary that hopefully touches upon the key aspects of the meaning and usage of slut-shaming that will help our users expand their word mastery.