What does  People With Bunny Ears emoji mean?

Where does 👯 People With Bunny Ears emoji come from? 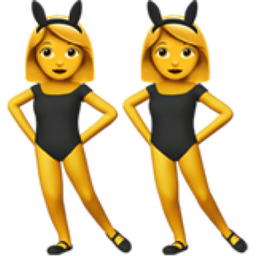 According to Emojipedia, the people with bunny ears is based on Japanese bunny girls, a borrowing of the iconic US Playboy Bunnies. In Japan, the costume is popular in anime, manga, and fan art as well as, true to the original concept, adult entertainers.

Many people in the US didn’t realize the emoji depicted bunny ears because the ears were short in early Apple designs, and commonly deemed them ballerinas with headbands. However, the 2015 8.3 iOS update increased the size of the bunny ears by 200%, making them more prominent. This change elicited negative reviews from users, some of whom called emoji sexist for including the bunny ears, among other reasons. In its latest iteration, iOS 10, the people with bunny ears emoji got longer legs and more defined ears. In 2016 a men with bunny ears emoji was added.

From Elementary school graduation to High school graduation! 6 years later, I wouldn't have wanted to graduate alongside anyone else!
@uglyheadz, May, 2017
When we hear it's #NationalWineDay!
@shaymitch, May, 2017
So scare quotes, to be sure, are in one way simply a part of the same movement that found ‘literally’ now meaning both ‘literally’ and ‘not at all literally,’ and that finds suggesting both praying and high-fiving, and that allows to suggest both two gals, twinning, and two Playboy bunnies, bunnying.
Megan Garber, “The Scare Quote: 2016 in a Punctuation Mark,” The Atlantic (December 23, 2016)
SEE MORE EXAMPLES

While officially called people with bunny ears, the emoji also goes by many other names, including: ballet, BFF, dancing girls, showgirls, and women/girls with bunny ears emoji.

The people with bunny ears emoji is widely used by women to indicate that they are having a good time or going out with close girlfriends, e.g., “Girls’ night out! .” In text messages, on social media, and the like, people with bunny ears can also express congratulations, excitement, friendship, or a festive mood. As an example of its celebratory uses, a person might end of the work week by saying, “Thank God it’s Friday ,” and combine it with other emoji such as the party popper, lipstick, or wine glass emoji to signify friendship and fun.

Because of the emoji’s associations with Playboy Bunnies, the emoji is sometimes used to mark content dealing with adult entertainment like lap dances and party girls.

Due to its adult and sexist connotations, be mindful of audience and context when using the people with bunny ears emoji.