What does 🏫 School emoji mean?

The school emoji depicts a building with windows and usually two or more floors. There is a clock tower in the center, and Microsoft and Google’s buildings are in bright primary colors.

It’s mainly used to reference schools or education … with other school-themed emoji like the blue book or the red apple.

Where does 🏫 School emoji come from? 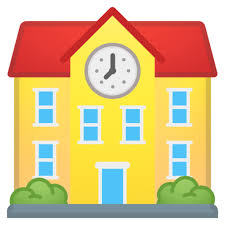 The school emoji was approved as part of Unicode 6.0 in 2010 and added to Emoji 1.0 in 2015. Since we’re on the subject of education … we’re pretty sure the creation of emojis had little to do with the field of semiotic theory (which is all about the value of symbols and signs in communication). Or, did it?

Microsoft’s version shows a quaint, smaller building with one level, but most show 2-story buildings in earth tones with no flag poles.

The school emoji is used in posts that reference education, schools, and teaching, in all grades, from kindergarten to college.

This is not meant to be a formal definition of 🏫 School emoji like most terms we define on Dictionary.com, but is rather an informal word summary that hopefully touches upon the key aspects of the meaning and usage of 🏫 School emoji that will help our users expand their word mastery.