What does 🦕 Sauropod emoji mean?

The sauropod emoji depicts the general features of a Sauropoda, the largest known land animal which lived during the Jurassic and Cretaceous periods … but in a slightly cartoonish way.

Shown with a small head, short thick legs, long neck, and tail, the emoji exudes a kind benevolence, fitting for this herbivorous creature.

The emoji can be used to express enthusiasm for dinosaurs, of course, as well as a critique of something or someone who is seen as old-fashioned or outdated.

Where does 🦕 Sauropod emoji come from? 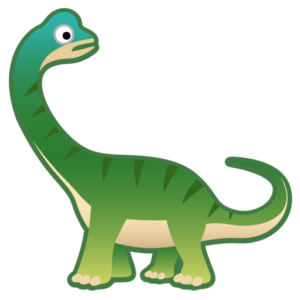 Well, it’s about time! It may not have taken 66-million years (which is when dinosaurs vanished from the Earth), but a lot of people were long anticipating the arrival of this emoji. There were forums and web pages devoted to it, and even the Natural History Museum in London got on board with an internet-wide  “Sauropod Emoji Campaign.” People complained about too many chickens and a plethora of train emoji. “Why no dinosaurs?” they cried.

The sauropod was finally approved as part of Unicode 10.0 in 2017 and added to Emoji 5.0 in 2017, which is when the T-rex emoji also appeared. Across platforms, the sauropod appears mostly blue or green and is full-bodied except for Facebook’s version, which features the head only.

Sometimes you just have to wait for nice things.

Dinosaur fans were flat-out elated when the sauropod emoji appeared.

However, the word dinosaur can sometimes imply a negative, and the emoji can be used to relate to a person or thing (a business or tradition, for example) that is out of step with the current times or about to become obsolete.

It can also be used to refer to something outrageously large.

I just found the dinosaur emojis 🦖🦕 there will be no living with me now. ALSO, FYI Emoji designers, to make a proper food web, i now need prehistoric plants that look like #cycads, #ferns, #mosses – get on it! #foodweb #scicomm via #emoji #dinosaur

Now that we have the emoji, people can also use it to embarrass their pets.

When you go to Walmart at midnight for no reason. I bought Kiwi a dinosaur costume 🦕🦖 pic.twitter.com/61G5ZhlAKE

Journey back in time with our friendly herbivores at the brand new 2nd main stage Wompy Woods! We’re stoked to unveil this 5 story high BEAST of a stage next weekend!! 🦕 pic.twitter.com/nUQy3V2IFv

and for promoting other “necessary emoji” campaigns!

Happy #WorldEmojiDay! We wish there was an official #Nessie #emoji (maybe based on the surgeon’s photo), but for now, which of these Nessie-esque emojis is your favourite?
🦕🐊🦖🦎🐍🐲🐉#Lochnessmonster #lochness #dinosaur #dragon #lizard #snake #scotland #emojiday #nessieemoji pic.twitter.com/xS4BJB2JsC

This is not meant to be a formal definition of 🦕 Sauropod emoji like most terms we define on Dictionary.com, but is rather an informal word summary that hopefully touches upon the key aspects of the meaning and usage of 🦕 Sauropod emoji that will help our users expand their word mastery.