What does 💀 Skull emoji mean?

The Skull emoji 💀 shows a simple skull, not to be confused with the Skull and Crossbones ☠️ emoji … that one is completely different, of course.

The black cavities of the Skull emoji 💀, where the eyes would be, are enormous, and the inclusion of teeth varies from platform to platform.

Where does 💀 Skull emoji come from? 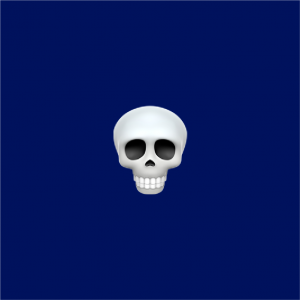 Meanwhile, the Skull emoji 💀 has a more fun feel … even though it still can be used when talking about death.

The human skull has long been associated with death and creepy things. Being an easily identified part of a skeleton, it’s the part of the body that conveys the deepest representational meaning of life, both past and present.

During the Día de los Muertos (Day of the Dead) holiday traditions, in which late loved ones are remembered, the skull is an omnipresent symbol, represented in sugary treats and colorful art. While looking death right in the face (or what’s left of it) should be scary, the bejeweled, bedazzled, kaleidoscopic Day of the Dead treatment of the human skull has a way of turning fear into something much easier to manage.

Overall, while we associate it with death, the skull has also enjoyed popularity in trendy design, being featured on everything from jewelry to clothing.

Waiting to hear back if I've found a local baker who makes pan de muerto up here in New England. I'm accustomed to spending this holiday in Texas with family, at cemeteries, in bakeries. This year will be so different. 💀

The Skull emoji 💀 is not usually used in a serious or dark way, though it’s sometimes used in social media relating to death or the paranormal.

More often, it is used in relation to Halloween, to uncertainty, to scary things in life, and to those things which are sure to kill us, like kettlebells or deep embarrassment.

Again, remember the Skull and Crossbones ☠️ emoji is used more as a warning, about something dangerous, deadly, or toxic (yes, it can be a person). The simple Skull emoji 💀 mostly pokes fun at death … or alludes to it in a friendly way.

Instead of its usual huge Dia de los Muertos celebration, Dunedin restaurant Casa Tina is building a large Community Ofrenda in Pioneer Park and inviting people to bring pictures of loved ones for the altar Oct. 15-Nov. 2! Check it out! 💀🇲🇽🌮https://t.co/ci7CrE1HBh

This is not meant to be a formal definition of 💀 Skull emoji like most terms we define on Dictionary.com, but is rather an informal word summary that hopefully touches upon the key aspects of the meaning and usage of 💀 Skull emoji that will help our users expand their word mastery.