What does 🌷 Tulip emoji mean?

A symbol of springtime, the lovely tulip is represented in the emoji world by tulips in various shades of pink and red, with almost every digital platform showing a stem and two long leaves reaching skyward. The Tulip emoji 🌷 is usually used in posts about flowers, beauty, and springtime … though it can be sexual in nature as well (what a surprise).

Where does 🌷 Tulip emoji come from? 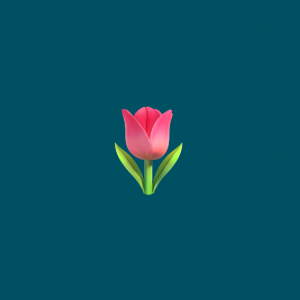 Used in social media wherever beauty, romance, flowers, and gardening themes are prevalent, the Tulip emoji 🌷 also appears in texting on occasion to represent female genitalia due its soft, pink petals. Why?

Flowers have long been viewed as being appropriately representative of this part of a woman’s anatomy. The most famous instance is in the work of painter Georgia O’Keeffe, though many critics now dismiss the Freudian theory that O’Keeffe’s flower paintings were intentionally created with vulvas in mind. She always claimed they were not, and the initial theory was put forth by a man, the photographer Alfred Stieglitz, who became her husband … so there’s that.

Tulips come in a dazzling array of colors and are beloved for their beautiful symmetry, grace, and ease in growing. Just throw some bulbs in the ground in the fall, and you’re likely to get some tulips in spring! Sadly, the blooms only last for a few days.

Tulips are part of the lily family, and all of their colors symbolize things as well: red symbolizes true love, white symbolizes purity and forgiveness, and yellow is all about good wishes, sunshine, and cheeriness. Pink? Pink is about affection, but it’s not as strong an expression of love as red.

Tulips are native to central Asia, but migrated to the Netherlands, or Holland, where they became a treasured, precious item during “Tulip mania” in the Dutch Golden Age of the 1600s. The bulbs and flowers were so fashionable and so desired that the exceedingly high prices created what is often referred to as the first “speculative bubble” in an economic market. The Netherlands is the world’s largest tulip producer today.

Happy Saturday! My tulips are in full bloom and they make my ❤️ happy. 🌷🌷🌷
@planetalvina, May 2, 2020
One glance at my closet & you know I'm a sucker for flowers. But the 1 thing I like even better than flowers is having people in my life who know when it's time to send some. Let's all appreciate them now. 🌹🌷🌺 🌸
@FilmIntuition, January 30, 2021

Used in posts about spring, flowers, love, sweetness, femininity, and innocence … the Tulip emoji 🌷is also frequently used to express appreciation for the beautiful tulip itself.

Only two and a half weeks until we spring forward ☀️🕰🌎🌷☀️

The Tulip emoji 🌷 is also used in posts that celebrate the color pink, which wouldn’t be the case if the emoji were a purple or yellow tulip.

This is not meant to be a formal definition of 🌷 Tulip emoji like most terms we define on Dictionary.com, but is rather an informal word summary that hopefully touches upon the key aspects of the meaning and usage of 🌷 Tulip emoji that will help our users expand their word mastery.