What does ✨ Sparkles emoji mean?

All that ✨ is not gold. It’s also the versatile sparkles emoji, ✨.

This emoji can stand for actual stars in the sky, show excitement and admiration, express love and congratulations, or suggest forms of magic and cleanliness. It can also represent other, more literal sparkling things, such as jewelry, glitter, and fireworks. Sexters even occasionally use it to mean “orgasm.”

Where does ✨ Sparkles emoji come from? 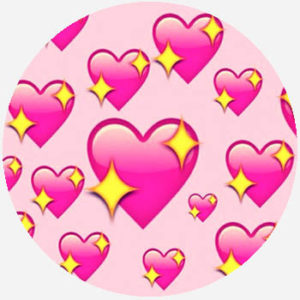 Digital stars and sparkles have been around since the early days of emoticons as they can easily be represented by asterisks, or *.  They can even be added to smiley faces to indicate being starstruck or in love, such as (*_*).

These crude asterisks were slowly replaced by all manner of emoji glitter and gold, including white medium star ⭐, glowing star 🌟, shooting star 🌠, and our classy cluster of three stars known as the sparkles emoji ✨, which debuted under Unicode 6.0 in 2010. It sometimes goes by the name stars emoji.

Across platforms, the sparkles emoji always appears as three gold or yellow stars. The sparkles emoji on iPhones and Androids are mirror images of one another: a large star with two little ones to one side. Samsung features sparklier-looking sparkles on a blue background while Microsoft adds some pink and blue to the mix, as shown in the screenshots from Emojipedia below: 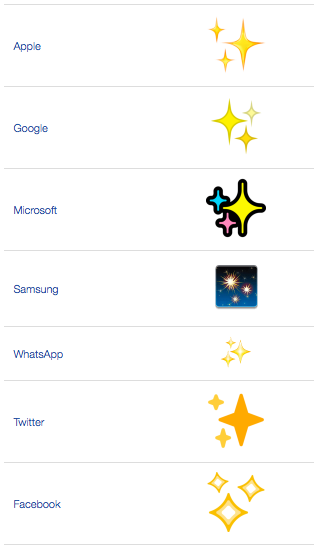 On the messaging app Snap, the sparkles emoji displays next to users you are in a group chat with.

In texts and on social media, the sparkles emoji is used to highlight posts about feeling excited and giddy with love, perhaps as if “seeing stars” or feeling all tingly inside.

what kind of glow is this?✨ pic.twitter.com/XzE1Ab8IND

Among astronomy enthusiasts, the sparkles emoji can represent those twinkle, twinkle, little stars and the cosmos more generally.

People who are proud of accomplishments sprinkle in some sparkles emoji when they are or someone is feeling like a star.

The day I swore the prolific Hippocrates Oath and got inducted into the Medical Profession.#DrETP ✨ pic.twitter.com/D4v2TQC37u

today at breakfast with the princesses I met my favorite Disney princess since I was a little girl, Belle. I couldn’t even believe it, I was so star struck, and then I cried and then she hugged me. Best day ever ✨😍😭 pic.twitter.com/RvmRGdKzqi

The sparkles emoji can also mean clean, like sparkly clean, whether you’ve cleaned up your car or your life.

Bling bling! The sparkles emoji is used in plenty of posts about jewelry.

Don’t forget about glitter! The sparkles emoji is perfect for makeup applications.

TORONTO MAKEUP ARTISTS/ENTHUSIASTS🗣
Sooo I finally decided to go out on a limb and start my business!🤸🏽‍♀️🤗 I’ll be selling everything glitter related✨ I’m launching within the next week so make sure you get on it!!! This is only the beginning😏🔥🔥🔥🔥🔥🔥 pic.twitter.com/wysJloJbu8

And, perhaps most creatively, sexters might drop in a sparkles emoji to indicate that they’ve achieved orgasm.

And this is one situation where it has nothing to do with men but everything to do with a woman’s power. The power you have as a woman to create intense orgasms ✨💦✨💦 This power, in turn, aids you in making better sexual partner choices

This is not meant to be a formal definition of ✨ Sparkles emoji like most terms we define on Dictionary.com, but is rather an informal word summary that hopefully touches upon the key aspects of the meaning and usage of ✨ Sparkles emoji that will help our users expand their word mastery.