What does ✋ Raised Hand emoji mean?

Bring it up high ✋ for this definition. The raised hand emoji, ✋, can be used to express “stop,” signal a high five, or imitate speaking up, as if raising one’s hand in class.

Where does ✋ Raised Hand emoji come from? 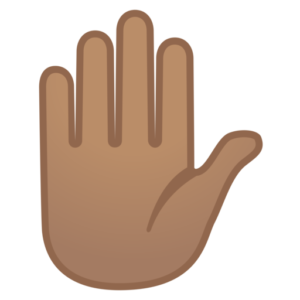 Raised hand emoji was released under Unicode 6.0 in 2010. The emoji appears as a single raised hand, with fingers together and the thumb pointing out to the side. It’s similar to the sign a crossing guard might make to indicate a driver or walker should stop. While its default color is yellow, skin-tone modifiers are available for raised hand emoji.

The raised hand emoji has a range of tone. It can be negative. For example, it can convey “Stop bothering me” or “Don’t do that anymore” (e.g., talk to the hand).

It can also be more positive, expressing the fervor, say, of raising your hands in religious worship.

Yess sir my brother is back🔴🔵✋🏾👈🏾
@Jashaun06, October, 2017
🎙️👐✋ #Federer in his pre tournament press conference #Wimbledon...
@suamax8, July, 2018
People telling me that I'm giving out "hints" with the ring/engagement posts.. Bishh, I been posting things like that since MySpace ✋🏻
@whitrichmond, October, 2017
SEE MORE EXAMPLES

True to its name, the raised hand emoji can be a digital form of raising one’s hand (e.g., speaking up, voicing agreement, asking for a show of hands).

The raised hand emoji can be used in place of an in-person high five. Sometimes, it can even be accompanied by a paw shake from an animal friend.

The emoji is popular in sports, frequently used in a similar manner as the woman/man raised hand emoji (🙋‍♀️,🙋‍♂️). Here it can be used to say, for example, “Yes, I’m ready for some tennis”:

First day of the #WTA season!

Who's ready for tennis ✋ pic.twitter.com/Pint3UMemy

It is often featured in ad campaigns. For example, the raised hand emoji has been used on New Year’s Eve to discourage people from drinking and driving as a forceful “stop” or “don’t.”