What does  Ok Hand emoji mean?

The OK hand emoji has a range of meanings: It can stand in for the word OK, (or the OK hand gesture) communicate strong approval, mark sarcasm, or combine with other emoji to represent sex.

Important context: While the OK hand emoji 👌 has many harmless meanings, it was co-opted as a white supremacist symbol in the late 2010s. One should now be mindful of context when using or coming across this emoji.

Where does 👌 Ok Hand emoji come from? 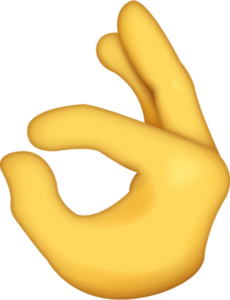 The OK hand emoji is also referred to as the A-OK, OK, or OK hand sign emoji.

The OK hand emoji, however, is often used to express that something is perfect, excellent, just right, choice, or on point.

Marty with the flashy leg kick save
Nice 👌#EaglesCountry pic.twitter.com/dWvAFlPo4W

The emoji can also mark sarcasm, like an ironic “Good job” or “Way to go.” For instance: “Just spent all night writing a term paper. Forget to hit save. .” As with other emoji, strings of OK hands can intensify or emphasize the sentiment.

Beginning in 2017, the “OK” hand gesture began to be interpreted as a white supremacist hand signal due to a hoax spread by alt-right communities and users of the web site 4chan that the symbol was actually a secret white supremacist gesture. At first used to troll the media, the gesture eventually lost its satiric intent and was used sincerely by white supremacists to promote racist views. The hijacking of the gesture was so widespread that the Anti-Defamation League added it as a hate symbol in 2019.

Fate of the Furious is . every sequel just keeps getting better and better.
@janine_tugonon, May, 2017
Two years and you couldn't even have the decency to acknowledge me. That's real nice.
@Lost_Confused_, April, 2015
found a sketchy pdf of the previous edition of my anatomy textbook online
sapphicscience, Tumblr, August, 2015
SEE MORE EXAMPLES

This is not meant to be a formal definition of 👌 Ok Hand emoji like most terms we define on Dictionary.com, but is rather an informal word summary that hopefully touches upon the key aspects of the meaning and usage of 👌 Ok Hand emoji that will help our users expand their word mastery.