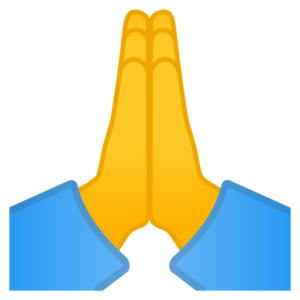 The folded hands emoji looks like hands that might be pressed together for religious prayer and is thus linked to the concepts of spirituality and hopefulness. It’s used in religious, non-religious, and otherwise spiritual contexts. In religious or spiritual contexts, this emoji is accompanied with prayer, sentiments of goodwill, or with reference to a passage in religious scripture. In non-religious contexts, a person might say they’re praying for something too, though they might mean that they’re just strongly hoping for that thing. This emoji can also accompany hopefulness or well wishes. It’s perfect for wishing someone a speedy recovery when they’re injured.

Uses of the folded hands emoji include any situation where a person might gesture with their hands together in real life. Like some other emoji, it adds to the conversation by virtue of representing something physical.

In Japanese culture (and some other Asian cultures), the gesture of pressing your hands together represents please, thank you, and I’m sorry, in addition to having spiritual associations. Those meanings of the folded hands emoji have also carried over to its use in the West, but here it’s more strongly linked with the religious connotations.

This emoji is also useful when a person wants to express gratitude. Someone might say, “You guys are the best friends I’ve ever had.” Then they’d include the folded hands emoji to show just how thankful they are to have those people in their life. Another place it might appear is when someone is asking or begging for something as a visual “please.” They might use this emoji when they’re hoping their favorite band comes to their city. Whatever it is, the folded hands emoji looks a lot like the hands of someone who’s pleading for something.

On some devices, this emoji shows up only as two hands touching, whereas on others, it shows up with a person attached to those hands. On their own, the two hands can look like they’re high-fiving. The differences in appearance across platforms have prompted discussion among users as to whether or not they’re praying or high-fiving. People who see them as praying hands point out that when someone prays, their thumbs are on the same side on both hands, whereas it’s the opposite in high-fives. In the end, it’s up to individuals to interpret this emoji for their own uses.

Dear @KensingtonRoyal , congratulations from across the pond. 🙏🎊 https://t.co/KO5pkuq7zJ