What does 🦶Foot emoji mean?

The foot emoji, 🦶, depicts a human foot at various angles.

It’s used for a wide range of content dealing with feet, from walking to pedicures to figurative missteps.

Where does 🦶 Foot emoji come from? 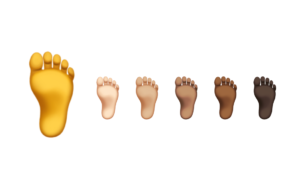 On older, unsupported platforms, it may appear as a box or question mark. But, that’s OK. We’re here to tell you what it looks like.

The foot emoji represents a human foot from various angles, often delineating all five toes. Apple and WhatsApp’s designs depict the sole of a foot. Google’s design shows a right foot and ankle, while other major platforms, including Twitter, Facebook, and Samsung, show the left. 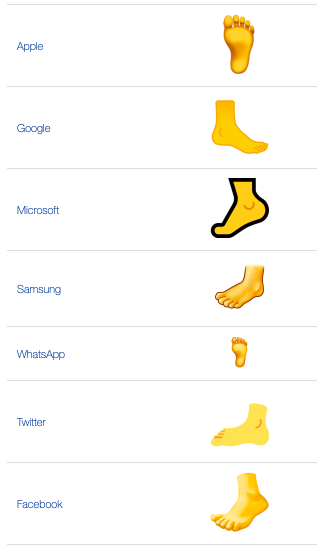 Like many other emoji that show people and their parts, the default color for the foot emoji is a Simpsons yellow. But, the foot emoji also has skin-tone modifiers, ranging from light to dark: 🦶🏻, 🦶🏼, 🦶🏽, 🦶🏾, and 🦶🏿.

On Apple operating systems, the foot emoji, as noted, shows the bottom of the foot. Darker skin tones of this emoji have prompted some criticism by people who, rightly, point out that darker-skinned people usually have lighter skin tones on their soles (and palms).

Doing too much – if the bottom of your foot is black you should be visiting your doctor. https://t.co/kNDiLLNM8d

The foot emoji is a more realistic alternative to the footprints emoji, 👣, which joined Unicode 6.0 in 2010 and depicts the outline of two human feet. It’s often used in combination with the foot emoji and the paw prints emoji, 🐾. 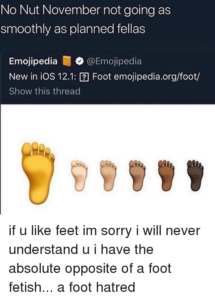 The foot emoji is frequently used in reference to all things foot-related, figuratively and literally. This includes walking …

I love walking around barefoot 🦶

Get your free @falke_sa leg and foot 🦶 massage at the Falke Foot Zone or foam roll yourself to better feeling muscles. #LiveMore pic.twitter.com/UBDPyB3XLL

I'm actually getting a pedicure at the moment. So relaxing…🦶💅💅💅💅💅💅💅💅🦶 pic.twitter.com/ut3VbNUg9l

.@EKUBaseball will serve approximately 250 local children by washing their feet and giving them a new pair of shoes on Monday. The event is part of the National Day of Service campaign by Samaritan’s Feet.
🦶👣👟👟👟https://t.co/Rl16GvrJxs

… and various foot-related figures of speech (e.g., misstep for “blunder”).

My missteps 🦶 have only improved my balance ⚖️ . I am better than before.

The foot emoji also marks content dealing with athletic footwork, as in the sport of basketball.

People also use the foot emoji to discuss their, yup, foot fetishes. (Hey, whatever floats your boat.)

I am the Queen of Foot Fetish

Don’t ever forget it bitch boy

My after gym feet with ruin you 🦶 #findom #footfetish pic.twitter.com/Kq9ipUB7Ve

This is not meant to be a formal definition of 🦶 Foot emoji like most terms we define on Dictionary.com, but is rather an informal word summary that hopefully touches upon the key aspects of the meaning and usage of 🦶 Foot emoji that will help our users expand their word mastery.