Previous Word at a glance
Next Word B

What does awkward turtle mean?

Ever talk trash about someone only to discover that they're actually sitting right by you? *awkward turtle*

Awkward turtle is a hand gesture made by placing one hand on top of the other and wiggling both thumbs. A nonverbal signal of social clumsiness, the awkward turtle is often performed or said humorously in uncomfortable situations, especially for endearing or cutesy effect.

Where does awkward turtle come from?

An entry for awkward turtle appears on Urban Dictionary in 2005, but its origins are unclear. In early 2006, Andrew Stein, of University of Pennsylvania’s student paper The Brown Daily Herald, noted widespread use of the awkward turtle on UPenn’s campus as a way for students to call out situations they found themselves in as awkward. However, in 2009, the word sleuths at the San Diego-based public radio show A Way With Words suggests the University of California, Los Angeles as awkward turtle‘s place of birth. *awkward turtle*

Why turtle? Perhaps, because the creature is are cute and lovably slow, and when they get flipped over, they awkwardly have to get themselves back up.

What is clear, though, is that awkward turtle spread in 2006 and, by 2008, had gone mainstream, with over 500 awkward turtle fan groups on Facebook. It had gotten so big that the Chicago Tribune even ran a story on the term. The author, Jessica Leber, speculated that the phenomenon had become a thing among high school and college students due to their willingness to embrace awkwardness as being a part of life—to see nerdiness as cool, even something to be proud of.

Some people believe that the awkward turtle gesture is sign language for “sea turtle,” but American Sign Language expert Donna E. Gustina at the National Technical Institute for the Deaf says that it actually means “platypus.” *awkward platypus*

Regardless of exactly how awkward turtle came about, folks cashed in on the meme in the 2000–10s, selling awkward turtle merchandise like stuffed animals and even a card game. 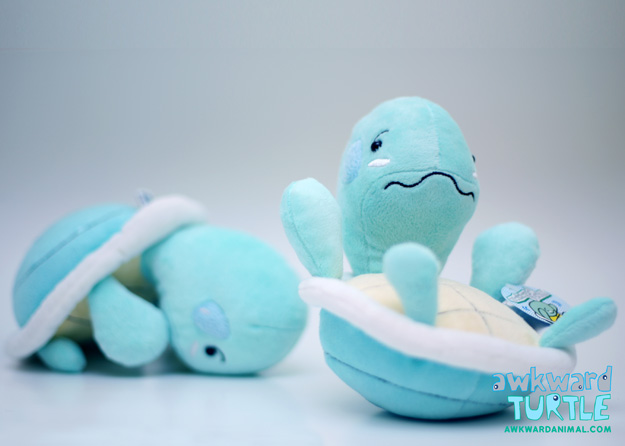 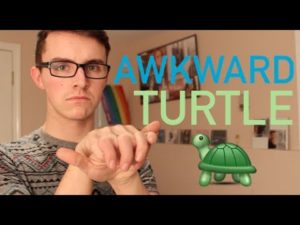 YouTube
I can talk so easy over social media and then I’m an awkward turtle in person. 😒
@jesss_iii_caaa, March, 2018
This wonderful, clumsy, candid moment, where even the crown’s mighty power could not conquer the Awkward Turtle God. Royals, they’re finally just like us!
Elise Taylor, Vogue, July, 2017
SEE MORE EXAMPLES

A person who feels awkward themselves or who has observed something they find embarrassing may issue an awkward turtle as mild, humorous social commentary. Originally, this was in the form of the hand gesture, but the signal has become common enough where people might just say, or type online or in texts, the phrase. Someone might also be called an awkward turtle if they are seen as quirky or clumsy. This is usually not done in a mean way, but rather in a loving, playful way—an embrace of nerd-dom and imperfection. 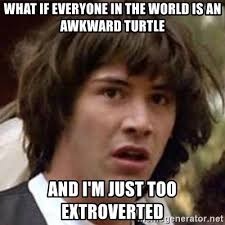 I’ve secured the payload. Let’s move it out. I grouped up with @playoverwatch on the #OWPayloadTour at Anime Expo.

Who else finds it hard to pose for photos? I end up looking like an awkward turtle.

This is not meant to be a formal definition of awkward turtle like most terms we define on Dictionary.com, but is rather an informal word summary that hopefully touches upon the key aspects of the meaning and usage of awkward turtle that will help our users expand their word mastery.

Previous Word at a glance
Next Word B