What does ✊ Raised Fist emoji mean?

The Raised Fist emoji ✊ depicts a raised right hand clenched into a fist, displayed outwards as if raised into the air. The emoji is commonly used to express solidarity with historically oppressed groups or people and social causes. It is also used to convey various ideas of empowerment, political protest and resistance, and civil disobedience. Sometimes, the emoji is used to represent a fist bump, similar to the Oncoming Fist 👊, Left-Facing Fist 🤛, and Right-Facing Fist 🤜 emoji.

The Raised Fist emoji ✊, especially versions with darker skin tones, are especially used to show support for Black Lives Matter and other protests and racial injustice and police violence.

Where does ✊ Raised Fist emoji come from? 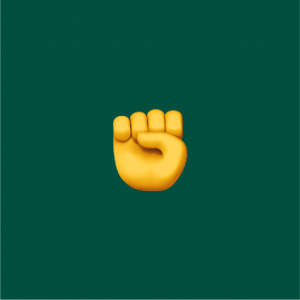 The Raised Fist emoji ✊ was approved under Unicode 6.0 in 2010. On all major platforms, the generic form of the emoji shows a yellow right hand with fingers clenched into a fist, palm towards the viewer. Skin tone modifiers are available for this emoji.

Since its release, the Raised Fist emoji ✊ has been used to express statements of resistance and defiance. The raised fist itself has been used as a gesture of solidarity, opposition to oppression, and political protest since at least the early 1900s. This fist is especially associated as a symbol of Black Power and Black pride, popularized by the Black Panther Party in the 1960s–70s.

This guy at the gym is playing some SERIOUS air guitar in the corner by himself. Get hyped up for that next set my man ✊
@Stillwephens, February 17, 2020
Black lives matter. Today. Tomorrow. Forever. ✊
@TanieluN, August 25, 2020

The Raised Fist emoji ✊ can be used to represent general feelings of strength, power, and energy, such as when one feels “pumped up” or is conveying a sentiment or “right on” or “rock on.”

Centuries from Fall Out Boy gets me so pumped up✊🔥

The emoji is also sometimes used to represent a fist bump.

An important note on using the different skin tones available for the Raised Fist emoji ✊: many white allies of Black Lives Matter commonly use all skin tone versions of the Raised Fist emoji, ✊🏿✊🏾✊🏽✊🏼✊🏻, rather than just the Light Skin Tone or Medium-Light Skin Tone ones (which may be confused with gestures of white power), the default yellow fist (which may be taken as erasing skin color), or darker-skin tones on their own (which may be considered a kind of identity appropriation or digital blackface).