What does rest in power mean?

A variation on rest in peace, rest in power is used, especially in Black and LGBTQ communities, to commemorate a person whose death is considered unjust or wrongful. In this way, rest in power is a call to continue the struggle for social justice and as a show of solidarity.

Rest in power is also used to pay respect to a person, especially a person of color, who made a difference in the lives of minority communities. It is sometimes used to note the death of a person felt to have died too soon or senselessly, or a person who was influential or meaningful to people more generally.

Where does rest in power come from? 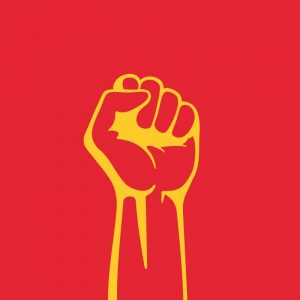 Rest in power is a variation on rest in peace, commonly abbreviated as RIP and largely based on the Latin requiescat in pace, meaning “may he or she rest in peace.” While originally written on gravestones and wishing a deceased person eternal peace in the afterlife, RIP is now commonly used to respectfully mark the death of a person.

According to etymologist Barry Popik, rest in power was first used in a newsgroup in February 2000 in honor of Mike “Dream” Francisco, an influential graffiti artist in the Bay Area who was killed during a robbery.

Popik’s research shows rest in power spread in 2005, appearing in reporting from the Bay Area and then Ottawa, Canada. The reporting noted instances of rest in power graffitied to memorialize two young women, the former shot dead and the latter, murdered.

Rest in power was occasionally used on Twitter in the late 2000s and early 2010s, mainly connected to the death of hip-hop artists and Black musicians.

The phrase rest in power rose to prominence in 2014, after the police shooting death of an 18-year-old Black man, Michael Brown, in Ferguson, Missouri, and the suicide of Leelah Alcorn, 17-year-old transgender girl.

Both of their deaths were seen as the result of systemic oppression of members of minority groups. Among people of color and in the LGBTQ community, rest in power indicates such unjust deaths were not in vain, that their legacy is the continued fight for justice—that their deaths have the power to make a meaningful difference.

More spiritually, rest in power can additionally imply the hope that the deceased person can now rest, free from earthly oppression.

Rest in power was notably used in the titles of a 2017 book and 2018 documentary on Trayvon Martin, the 17-year-old Black teen whose shooting death helped launch Black Lives Matter.

Examples of rest in power

#ElijahCummings was one of the most honorable, selfless public servant who cared deeply for others. A powerful force for change. We will miss you brother. #WeAreBaltimore. Rest in power.
@donnabrazile, October 2019
Ms. Valencia Nelson one of the founders of Afrigeneas made her final transition on October 13, 2019. Ms. Valencia Nelson was a giant in research for African Americans. Her Afrigeneas.com website and list serv have been used by untold people. May she rest in power with the ancestors. Click on the link to learn more about her extraordinary life. She will be missed.
Nichelle M. Hayes, Indianapolis Recorder, October 2019

Who uses rest in power?

Rest in power is commonly found on social media and online obituaries of various forms, written before or after the names of a deceased person or naturally in a statement wishing the person to rest in power.

The memorial is still used in Black and LGBTQ communities to honor unjust deaths, past and present.

Just read that headline, then read it again.

This makes me sick. We have an astonishing and sobering amount of work to do to protect and further our most basic rights as a global #LGBTQ community. Rest in Power ❤🏳️‍🌈https://t.co/anrHzecFeu

It's a shame that we have to erect bulletproof memorials to the victims and martyrs of white racist violence in America.

Rest In Power Emmett Till https://t.co/5HERoEptWA

Rest power is also used in honor of public figures, especially people of color, who made an impact on minority communities in their work and lives.

If Katherine Johnson had let racial and gender barriers stop her, we may have never made it to the moon.

She lived in power. May she now rest in power. ✊🏽♀️https://t.co/imoq4mbuh0

Prayers and condolences to the family of Mr. Greg and the @hp_warriors1. May he rest in Power. ✊🏿❤️ pic.twitter.com/HieEn5mlDm

Thankful for the invisible power of the late Sen David Smith. What rich legacy in making sure Canadians with a disability were included jn our Charter of Rights.
Rest in power, Sen Smith.

Increasingly, rest in power is being used of people who died too soon, died senselessly, or were more generally influential or meaningful to people’s lives in some way.

Ric Ocasek and Eddie Money were geniuses in their own rights and we are all lucky to have enjoyed their incredible music. Rest in power, Ric and Eddie.

Rest in power @TyreJim. You were an excellent colleague, a relentless shitposter, and a fellow sufferer of eye explosions.

Like rest in peace and RIP, rest in power is also seeing more and more humorous and ironic usages.

This is not meant to be a formal definition of rest in power like most terms we define on Dictionary.com, but is rather an informal word summary that hopefully touches upon the key aspects of the meaning and usage of rest in power that will help our users expand their word mastery.