What does speak truth to power mean?

Stand up for what’s right and tell people in charge what’s what. That’s the idea behind the phrase speak truth to power, an expression for courageously confronting an authority, calling out injustices on their watch, and demanding change.

SJW, truth be told, woke, I Have a Dream speech

Where does speak truth to power come from? 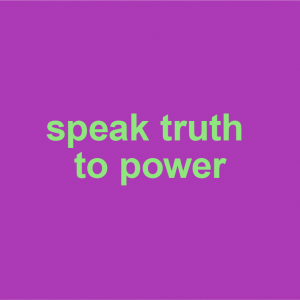 The specific phrase speak truth to power is credited to Bayard Rustin in 1942. Rustin was a Black Quaker and a leader in the Civil Rights Movement, advocating nonviolent methods in his fight for social justice. In a letter written that year, Rustin stated that “the primary social function of a religious society is to ‘speak the truth to power.’ The truth is that war is wrong.”

The phrase was picked up in a 1955 text about pacifist strategies to achieve justice, Speak Truth to Power: A Quaker Search for an Alternative to Violence, published by a Quaker organization in conjunction with Rustin. The work became a guide for many people organizing against violence during the Cold War.

There’s nothing quite like mothers standing up and being allies to youth activists to speak truth to power ♻️🔥. Thank you Maris for standing with the youth and speaking up at @RepAdamSmith ‘s townhall on behalf of your child. pic.twitter.com/11ttOVbgUi

Malala Yousafzai is a powerful contemporary example of speaking truth to power. She was shot in the head in 2012 for her activism on behalf of women’s education in Pakistan. She survived, spoke truth to power by standing up to the oppressive Taliban in her country, and won a Nobel Peace Prize in 2014 at just 17 years of age.

In 2016, the Robert F. Kennedy Foundation launched a human rights education program called Speak Truth to Power based on Speak Truth to Power: Human Rights Defenders Who Are Changing Our World, a book one of Kennedy’s daughters, Kerry Kennedy, published in 2000.

Examples of speak truth to power

Critics who speak truth to power and suffer the consequences recur often in Chinese history.
Rana Mitter, South China Morning Post, August 26, 2018
It is not smart to be quiet and hold your silence in the face of injustice and oppression. It is not smart to hurl insults and throw stones at those who are bent on oppressing you. It is however smart and intelligent to speak truth to power with no regret. TRUTH OVERPOWERS EVIL.
@ennpams1977, August 13, 2020
*DARE YOU* to watch @GretaThunberg speak truth to power here (= to a room full of human inertia, & inertia that doesn't even *pretend-practice* the art of self-defense—how can it?) & not cry with her. *She's nearly inconsolable, but too smart for that.*
@ohsensibleshoes, September 23, 2019
SEE MORE EXAMPLES

Who uses speak truth to power?

The expression speak truth to power implies a moral imperative to stand up for what is right,  especially to national leaders, even when it’s not the easiest thing to do.

John McCain shared a trait with journalists. Sadly, there is one less voice to speak truth to power. — 30 —

People can use speak truth to power, though, in any context when speaking out on a problem, whatever the scale.

Positivity pays off. We are all allowed negative thoughts, and you SHOULD speak truth to power, but being negative for clicks & impressions is super cringy. Represent yourself well by showing both sides. What you like AND what you don't.

Have an excellent day!

Sometimes, the phrase speaking truth to power can take a mocking tone, riffing on the perceived over-the-top, SJW nature of the expression.