What does Spida mean?

2. Nickname of Donovan Mitchell, record-breaking shooting guard for the Utah Jazz and contender for NBA’s 2018 Rookie of the Year

Where does Spida come from? 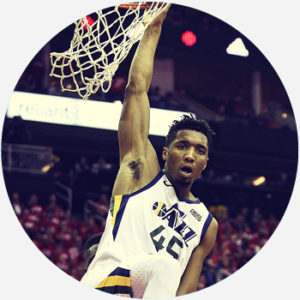 In an interview ahead of the 2018 NBA Slam Dunk Contest, Mitchell explained: “When I was younger, I was just a dunker. Like, it was all I loved to do, was just dunk. One of my teammate’s dad called me Spida. It just stuck.”

Spida is a variant pronunciation of spider. Reducing an end-of-the-word -er to an unstressed -a has long been a feature of some English dialects. The same process gives us brotha, playa, or gangsta.

Spida had been seen a bit before Donovan started rim-crawling though. A trip down memory lane shows a Jamaican spoken-word folktale recorded in 1980 that tells of Brotha Spida, for instance, and then there’s hip-hop artist Nelly’s track called “Spida Man” in 2004. For slang or humorous effect, internet users in the late 2000s wrote of surfing the web like a spida or being startled by an actual spida in their room.

Mitchell’s Spida, for its part, likens Mitchell’s in-the-paint prowess to the agile arachnid. Mitchell has a formidable wingspan, nearly seven feet, and vertical, over 40 inches—all on a powerful but compact just-over-six-foot frame. And, those long arms and bounce trapped his competitor’s like flies, as Spida left the court as the 2018 slam-dunk champ. Those arms also put up some record-breaking stats in his rookie season as a shooting guard for the Utah Jazz, drafted as the 13th pick following two years of college ball for the Louisville Cardinals:

Described as a “mix of Damian Lillard, Dwayne Wade, and Allen Iverson,” Spida is an emerging superstar of the game.

Text from NBA GM on Donovan: “He’s a mix of @Dame_Lillard, @DwyaneWade and Allen Iverson.”

Or better yet, superhero: the Amazing Spida-Man, as Mitchell’s fans so often compare him to Marvel Comics’s Spider-Man. It’s an apt comparison. Donovan Mitchell and Peter Parker share many Spidey senses. Both are daring and determined. Both are stealthy and smart. And, Mitchell swings from post to post as Peter Parker swings from skyscraper to skyscraper—except Spida doesn’t need to sling any web to do it.

Like actual spiders, Mitchell is also patient, honing his skills not just in drills but also by watching hours and hours of films, studying his opponents’ every move to learn how to best capture them in his defensive web or ambush them with a three-pointer.

But, for all his venom on the court, Spida has a reputation as a charming and witty team-player. Mitchell was nominated as the 2017–18 NBA Rookie of the Year, with race-watchers seeing the only challenge for the title coming from Ben Simmons—who technically sat out his first season for the Philadelphia 76ers due to an injury in 2016–17.

In a bit of good-nature trash-talk over the proper definition of a rookie, Spida memorably dunked on Simmons with an alley-oop from us at Dictionary.com.

From Jazz fans to sports journalists, Spida is used as a common name for that rare and unique specimen of basketball beast … formally classified as Donovan Mitchell.

On social media, people take advantage of the spider 🕷and spider web 🕸 emoji when celebrating his feats.

The Myth. The Man. The Legend. The Spida. 🕷#TakeNote #YearOfTheSpida https://t.co/ESrPIrYwZK

Spida, as noted, is often playfully embellished to Spida-Man.

Mitchell himself has run with his nickname, his Twitter handle being @spidamitchell. So has Adidas, who’s designed custom shoes and other sportswear inspired by spider and Spider-Man motifs.

🕷 @spidadmitchell Spida PEs🔥 My bro Donovan had to get right for the playoffs. Watch him show out with these on their first Homegame against the Thunder! #teamkickstradomis #utahjazz

This is not meant to be a formal definition of Spida like most terms we define on Dictionary.com, but is rather an informal word summary that hopefully touches upon the key aspects of the meaning and usage of Spida that will help our users expand their word mastery.