What does ❌ Cross Mark emoji mean?

No good! Very bad! Cancelled! Wrong! ❌! The big red X of the cross mark emoji generally communicates warnings, errors, and undesirability. It’s often used as a visual stand-in for No. In sports, the emoji is used to denote a “strike” in baseball, a missed scoring attempt generally, or a lost match.

More recently, supporters of President Donald Trump have been using the symbol in their social media handles to denote their support of Trump’s policies, or for the alt-right movement more generally.

Where does ❌ Cross Mark emoji come from? 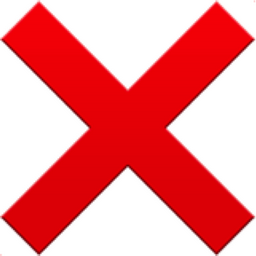 The cross mark emoji was approved in 2010 under Unicode 6.0. Put simply, the emoji is a big red X, drawing on associations of the color red with warnings (stop signs, no-smoking signs) and corrections (errors, red pens).  It can also be a visual marker for No. For the most part, these uses of the cross mark emoji across platforms is mostly uniform, though there are some notable variations.  In texts and online, the cross mark emoji is used when voicing a negative opinion or experience.

A recent development in this emoji’s usage is in fact political: in the US, supporters of President Donald Trump have been using the symbol in their Twitter handles to denote their support of Trumpism, or for the alt-right more generally.

Puffa coats with belts around the middle actually made me vom❌

@ellwhiteaway, December, 2016
Running into b Chenz at the airport before he goes and changes his life made my day. Good luck buddy see you when you come back nice and healthy ⭕❌⭕❌
@ReBeCcARoSeD, December, 2017
SEE MORE EXAMPLES

It can be thought of as the negative counterweight to the green check emoji:

The emoji can convey negative feelings about a person, like an ex-boyfriend…

The cross mark emoji can also convey a sense of failure of undesirability, imitating something crossed out in red pen:

The cross mark emoji can also convey something is “cancelled,” often used playfully.

The emoji sees some more specific uses, calling up “strike” in baseball or “sold out” in sales….

Strike 3 ❌❌❌ lesson learned and we moving on #OuttaThere

On another note, the cross mark emoji, when coupled with the heavy large circle emoji (⭕️), can stand for a loved one’s hugs and kisses, ❌⭕️❌⭕️.

Sometimes people use the cross mark emoji to stand for letter X, especially in the expression X marks the spot.

More recently, on the political front, the cross mark emoji, like the OK hand emoji, has been used heavily by members of the alt-right as an identifier on social media:

What do those things have to do with Making America Great Again? Nuthin! I like Presidents that marry call girls and do secret deals with the Russians!! #SoSmart #Merica pic.twitter.com/kxoYzbCYoq

This is not meant to be a formal definition of ❌ Cross Mark emoji like most terms we define on Dictionary.com, but is rather an informal word summary that hopefully touches upon the key aspects of the meaning and usage of ❌ Cross Mark emoji that will help our users expand their word mastery.