What does ⚾ Baseball emoji mean?

Based on the design of the modern-day baseball, the baseball emoji is used for all things related to the sport from which it gets its name, from the stats to the stands.

Where does ⚾️ Baseball emoji come from? 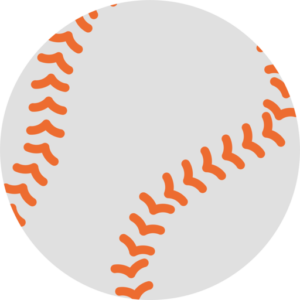 The baseball emoji—approved under Unicode 5.2 in 2009 and joining Unicode’s Emoji 1.0 set in 2015—is modeled after the ball used by Major League Baseball (MLB).

While the white leather and red stitching design have become iconic (and is how the emoji appears across platforms, as shown in the screenshot from Emojipedia below), the baseball was once far less glamorous. During the mid-1800s, when baseball was still an amateur sport, there was no standard for crafting a baseball. Instead, it would come in all different shapes and sizes, often cobbled together from the rubber of old shoes. In some cases, people got really creative, using fish eyes as the interior core of the balls, proving that there truly is a use for anything …?

Fast forward to the early 1900s, when baseball had gone professional under the formation of the MLB, and there were two standard balls in play. The first, used by the National League, used black with red stitching, and the second, used by the American League, used red and blue stitching. In 1934, MLB standardized the ball and settled on red stitching, due to its high visibility and the fact that red was a mutual color used by both leagues.

While the US may be the birthplace of baseball, the sport has seen growth in popularity around the world. In fact, the country with the highest medal count in the World Baseball Classic, baseball’s version of the World Cup, is not the US as of 2018, but Japan—birthplace of emoji.

Online, professional and amateur teams, athletes, and sports journalists and broadcasters are especially fond of using the baseball emoji when posting about games, players, and all other things in the ballpark all around the world.

Baseball & business go so well together. Join us for an Executive #MBA night at Progressive Field! Learn about our EMBA program & then enjoy the @Indians.

So too are fans of the sport, especially when letting social media know that they’ve got their peanuts and Cracker Jacks at a game.

The baseball emoji often doubles for the sport softball, though Unicode released a larger, yellow softball emoji in 2018.

This is not meant to be a formal definition of ⚾️ Baseball emoji like most terms we define on Dictionary.com, but is rather an informal word summary that hopefully touches upon the key aspects of the meaning and usage of ⚾️ Baseball emoji that will help our users expand their word mastery.