Feedback
4th of July
fall of the Berlin W...

What is the 4th of July?

Also called Independence Day, the Fourth (4th) of July is a public holiday in the United States of America that commemorates the adoption of the Declaration of Independence on July 4, 1776, which declared the original colonies to be free from British rule.

Where does 4th of July come from? 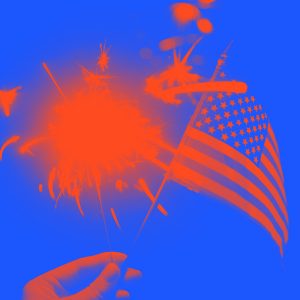 The term Independence Day is recorded as early as 1790, but the term Fourth of July, in reference to the US independence, is found as early 1779. Of course, the Independence Day/4th of July commemorates the events of July 4, 1776, when the Second Continental Congress adopted the Declaration of Independence, which declared the Thirteen Colonies to be free and independent of England.

The Second Continental Congress, which formed after the start of the American Revolution in 1775, voted to declare their independence (sovereignty) on July 2, but the Declaration of Independence, =-]\[he document largely authored by Thomas Jefferson explaining this vote, was adopted on July 4th. When the Founding Fathers actually signed the document, however, remains disputed. American independence from the British monarchy was secured in 1783, marking the end of American Revolution in 1783.

After the July 2 vote, John Adams famously wrote to Abigail, his wife:

The second day of July 1776, will be the most memorable epoch in the history of America. I am apt to believe that it will be celebrated by succeeding generations as the great anniversary festival. It ought to be commemorated as the day of deliverance, by solemn acts of devotion to God Almighty. It ought to be solemnized with pomp and parade, with shows, games, sports, guns, bells, bonfires, and illuminations, from one end of this continent to the other, from this time forward forever more.

Indeed, Americans commemorate their independence this way—but on July 4th, of course.

While celebrations of the 4th of July have taken place since 1777, it wasn’t until 1870 (referred to as the fourth day of July as a holiday for the District of Columbia) that it became a federal holiday—unpaid for federal employees until 1938. In 1781, Massachusetts was the first state to officially recognize the holiday.

Why are we emphasizing the word federal (vs. state and local) here? Because the US does not observe any national holidays mandated by the federal government, although the 4th of July is, in effect, celebrated like an official national holiday. The US Embassy in the UK provides a helpful explanation here:

Technically, the United States does not celebrate national holidays, but Congress has designated 10 “legal public holidays,” during which most federal institutions are closed and most federal employees are excused from work. Although the individual states and private businesses are not required to observe these, in practice all states, and nearly all employers, observe the majority of them.

Remarkably, both Thomas Jefferson (the US president who enslaved the most people) and John Adams (one of the few of the early presidents who didn’t) both died on July 4, 1826.

Examples of 4th of July

“I know a lot of my friends are basically canceling the Fourth of July and instead, they are celebrating Juneteenth,” said NiSheena Smith, an organizer of Avondale Estates’ Defend Black Lives event that will commemorate Juneteenth on Friday. “They are saying this is our Freedom Day.”
Crystal Jarvis, Decaturish, June 18, 2020
The Evanston Fourth of July Association has replaced its traditional 4th of July activities with an alternative virtual celebration, due to COVID-19.
City of Evanston (Illinois), July 24, 2020
Intriguingly, July 4th has become a telling historical core sample to the entire American experiment. A look at all the stuff that has happened on this date since the Founding Fathers penned their Declaration reveals the best of this country and, occasionally, the worst.
Ty Burr, “Through the years, July Fourth events a microcosm of our nation,” Boston Globe, July 1, 2016
In the month around July 4th, an average of 230 people end up in emergency rooms each day with fireworks-related injuries, the agency reports.
Niraj Chokshi, New York Times, July 1, 2016
SEE MORE EXAMPLES

Who uses 4th of July?

The 4th of July is traditionally celebrated with fireworks, barbecues, festivals, and other public events, including readings of the Declaration of Independence. Due to the patriotic nature of the holiday, it often involves red, white, and blue decorations (after the US flag), as well as tributes to American troops and government institutions. On the 4th of July, many people get to enjoy a day off from work to enjoy a long weekend or vacation.

Americans may wish one another (or be wished by residents of other countries) as Happy Independence Day, Happy July 4th, Happy Fourth of July, or simply Happy 4th. The 4th of July appears throughout popular culture, such as in the films Born on the Fourth of July (1989, based on a 1976 autobiography by Ron Kovic) and Independence Day (1996).

The 4th of July, however, remains a complicated holiday given the history of slavery in the US. The Declaration of Independence famously observes: “We hold these truths to be self-evident, that all men are created equal, that they are endowed by their Creator with certain unalienable Rights, that among these are Life, Liberty and the pursuit of Happiness.” But that freedom, equality, and independence was not granted to Black people, who were enslaved and oppressed. Frederick Douglass powerfully addressed this painful paradox in his 1852 speech, “What to the Slave Is the Fourth of July?” In it, Douglass memorably remarks:

What have I, or those I represent, to do with your national independence? Are the great principles of political freedom and of natural justice, embodied in that Declaration of Independence, extended to us? and am I, therefore, called upon to bring our humble offering to the national altar, and to confess the benefits and express devout gratitude for the blessings resulting from your independence to us?

This is not meant to be a formal definition of 4th of July like most terms we define on Dictionary.com, but is rather an informal word summary that hopefully touches upon the key aspects of the meaning and usage of 4th of July that will help our users expand their word mastery.