What does 🦃 Turkey emoji mean?

The turkey emoji represents the … well … turkey and serves as a symbol for the American holiday of Thanksgiving.

It also can signify non-holiday related feelings of gratitude.

Where does 🦃 Turkey emoji come from? 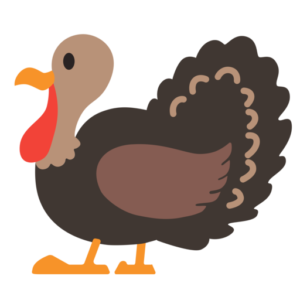 School kids in America are often taught that turkey on Thanksgiving is an American tradition because it’s what the pilgrims shared with the Native Americans to thank them for helping them survive the winter. In truth, the alleged three-day feast shared by the settlers and Wampanoag in 1621 probably featured venison … but that’s a different story.

Back to why Americans eat turkey on Thanksgiving … the holiday of Thanksgiving began in 1863 as an effort to unify the country in the throes of the Civil War. Turkey was promoted as a food in order to Americanize immigrants and for practical purposes: one of these beasts can feed a lot of people.

Fast forward to 2015 when the turkey emoji entered Unicode as a symbol for the Thanksgiving holiday. It shows a large brown bird, facing left with a red neck, and waddle.

It’s in the “animals and nature” sections of emojis since it depicts a live bird, one that could be happily running around in the wild. While there is a chicken drumstick and other food versions of the chicken in Unicode, there is not emoji of a dressed turkey ready for the oven.

In 2017, the poultry company Butterball launched a Change.org petition for a dead and plucked version of the bird to be added to emoji language. Poor turkey. Stay tuned to see if they are successful!

🍁🦃🙏Oh yes I ❤️#Thanksgiving 🥔🍠🍑 Sabrina, Stuffing, Mash, & #HOTGRAVY 💛#ThanksgivingWeek
@mintwoodee, November, 2018
Research shows that one of the greatest contributing factors to happiness is based upon how much gratitude we feel. Stark students focused in on this important character strength during the month of February. The best attitude is one of gratitude. 💜🦃
@ArtWithMsBell, December, 2018
#groundblind 🦃🦃🦃Why hunt turkeys from a ground blind? The answer is simple enough: It's easy! Today's blinds are large, comfortable and well-designed to allow the hunter to see and…
@heels2hiking, November, 2018
SEE MORE EXAMPLES

The turkey emoji is most commonly used around the Thanksgiving holiday for people to connect their posts to the occasion.

People also use the turkey emoji to mean the actual bird. Many turkeys live, laugh, and love all throughout the year and have rich and fulfilling lives during the months that are not November. So people who raise turkeys use this emoji in posts about their barnyard friends.

A post shared by MountVisionFarms (@mountvisionfarmsny) on Dec 2, 2018 at 7:23am PST

Animal lovers who would rather cuddle a turkey than eat one also use it to celebrate this animal.

#SquadGoalz RT if you believe animals should be free to be themselves.🌱❤️🌏🐷🐶🦃 #vegan #animals #compassion pic.twitter.com/LjswsglxjR

On the opposite end of the spectrum are hunters throwing up the turkey emoji to celebrate their kills.

Had a great start to my 44th birthday month!Heading in like a hammer! #birthday #month #3006 #ruger #browning #gunsgodglory #sanangelo #texas #cactus #mesquite #🦌 #🦃 #🐗

Virginia Tech sport teams and their fans use the turkey emoji to represent their mascot, the HokieBird.

Coach Beamer is set to be inducted into the College Football Hall of Fame in New York City tomorrow night! #Hokies 🦃

Finally, bowlers use it to celebrate the rare instance of getting three strikes in a row, also known as a “turkey.”

Sydney’s first turkey ! 🦃 here’s to a season of many firsts 👍 pic.twitter.com/XwnhQ6sj5d

This is not meant to be a formal definition of 🦃 Turkey emoji like most terms we define on Dictionary.com, but is rather an informal word summary that hopefully touches upon the key aspects of the meaning and usage of 🦃 Turkey emoji that will help our users expand their word mastery.