What does 🦆 Duck emoji mean?

Ducks are cute, and this emoji also fits the bill 🤣.

On most platforms, it’s seen as a mallard, in white, brown, and green.

Where does 🦆 Duck emoji come from? 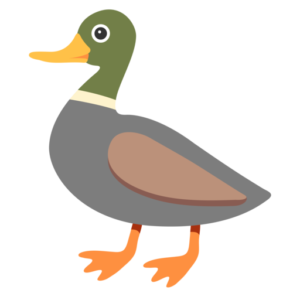 The duck emoji started out on the water, with a few hairs on his head blowing in the wind, but by the time it was approved as part of Unicode 9.0 and added to Emoji 3.0 in 2016, it had been simplified: the little duck body appeared on little duck legs, instead of bobbing in blue water.

He’s a more dignified creature now, and there is certainly no rubber duck nonsense here. That, however, doesn’t stop people from using it when they’re referring to their significant other with a pet name like “ducky.”

The duck emoji finds itself in some strange places. From terms of endearment, to “duck lips” posts, and even in exhibiting occasional “rhymes with …” functionality, the little guy gets around.

And, oh yes, it’s sometimes used with posts about … ducks.

Ducks of all kinds.

Moley met the *original* #JemimaPuddleduck today. She was absolutely charming, if a little dotty! She was a gift from #BeatrixPotter to the children of @MelfordHallNT when they stayed with her at Hill Top. (Jemima came with the children back to Suffolk) 😊🦆 pic.twitter.com/9mW4i78UzH

… and sometimes it’s even used by animal lover rock stars.

This is not meant to be a formal definition of 🦆 Duck emoji like most terms we define on Dictionary.com, but is rather an informal word summary that hopefully touches upon the key aspects of the meaning and usage of 🦆 Duck emoji that will help our users expand their word mastery.