What does🩸Drop of Blood emoji mean?

Depicting a droplet of falling blood, the Drop of Blood emoji🩸can represent all things blood-related, including bleeding from injury, blood tests and donations, and menstruation.

Where does 🩸 Drop of Blood emoji come from? 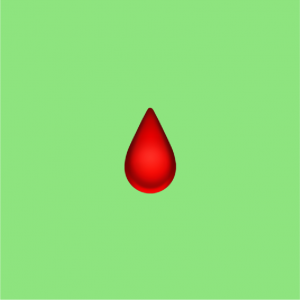 In many countries and cultures around the world, menstruation—getting your period—is shamed. To help reduce this stigma, the children’s rights nonprofit Plan International UK advocated for what they called a #periodemoji in 2017–19.

They started a petition, asking supporters to vote for their favorite design for a period emoji. A design showing underwear with a blood droplet won, but wasn’t accepted by the Unicode Consortium, which approves and standardizes emoji.

So, Plan International UK came up with a plan B. They partnered with the UK’s National Health Service (NHS) Blood and Transplant services to develop a Drop of Blood emoji🩸instead. That way, the emoji could be broader, representing menstruation, blood transfers, and other blood-related topics.

Unicode approved this proposal, which was added under Emoji 12.0 in 2019. The Drop of Blood emoji🩸shows a red drop of blood, like a red water drop. On unsupported platforms, the emoji displays as an empty box.

While feeling it is a step forward, some think the Drop of Blood emoji🩸is still insufficient for representing menstruation.

Examples of 🩸 Drop of Blood emoji 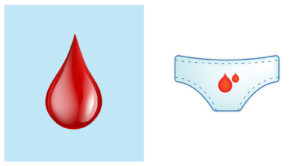 Who uses 🩸 Drop of Blood emoji?

The Drop of Blood emoji🩸can be used for various content concerning blood, including bleeding from an injury, blood tests and donations, menstruation, and heath and medicine more generally.

#MenstrualHygiene lets women and girls go to work and school – to reach their full potential. When they have taps, and safe/clean toilets, they can meet their hygiene needs.

Other blood-related applications for the Drop of Blood emoji🩸include gore in horror and metaphorical senses of blood, as in blood on one’s hands.

Unicode/Emoji 12.0 bringing us 🩸 drop of blood, can we please have the ZWJ sequence 😂‍🩸 for when you're crying blood (such as when opening the email newsletter from my son's gym class; yes, it's Comic Sans; that's the smallest issue)?