The Female Sign emoji ♀ represents female birth sex and feminine gender identities and expressions, often used online or in texts to champion feminism and women’s empowerment. The emoji can be paired with others, such as the Woman emoji 👩, to celebrate International Women’s Day, which falls on March 8 each year. 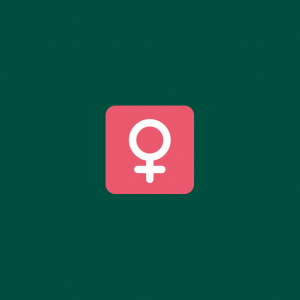 The standard symbol denoting the female sex goes back to at least 5 BCE, used by Greek astrologers and alchemists to represent Venus (the planet and goddess of love). In the mid-1700s, Swedish naturalist Carl Linnaeus—the guy who gave us all those Latin names in science, or binomial nomenclature—had the idea to use this ancient symbol to mark the female sex in plant genetics. That convention spread to medicine and other fields, notably adopted by feminists in the 1970s.

The Female Sign emoji ♀ was approved by Unicode in 1993, becoming widespread under Unicode 6.0 in 2010. On several major platforms, the emoji shows the female sign in white on a pink background.

Since 2010, Unicode has been offering female versions of emoji people whose defaults were (of course) men. On older devices that don’t support the upgrades, the Female Sign emoji ♀  may appear next to the generic forms to indicate “woman,” (e.g., the Merperson emoji 🧜 plus the Female Sign emoji ♀ may pop up on screens that can’t show the Mermaid emoji 🧜‍♀️).

Great to catch up with my federal parliamentary sisters in #Perth 🙋‍♀ ♀️
@JulieBishopMP, April 30, 2018
Loving how many female athletes are up for @BBCSport SPOTY. It's not positive discrimination, it's equality-all outstanding achievers ♀👏🏅
@runlikeforrest, November 28, 2016

Very often online, the Female Sign emoji ♀ simply displays after another emoji character because the full-fledged woman emoji isn’t supported on the platform. In some instances, this may appear redundant because the default emoji person is already a woman.

When used alone, the Female Sign emoji ♀ may mark content expressing feminine pride and feminist solidarity, notably used in the January 2017 Women’s Marches around the world and in the wake of the #MeToo movement exposing sexual violence and assault against women.

It’s so exciting and motivating to see a record number of women running for office in 2018. Bring on November! ♀ https://t.co/VjDpjUaq56

The Female Sign emoji ♀ is also used to mark International Women’s Day, which has been commemorated since 1911. Held on March 8, the day gives visibility to issues of women’s equality and gender parity, while also bringing attention to charities and women’s achievements.