What does #MeToo mean?

#MeToo is a social movement originating among women, advocating for survivors of sexual harassment or violence to speak out about their experiences in order to expose and combat various forms of sexual misconduct.

Where does #MeToo come from? 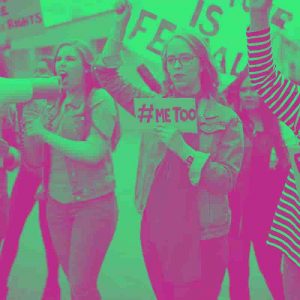 #MeToo dates back to 2006 on the social media site Myspace. Activist Tarana Burke coined the phrase as an empathetic response to other survivors of abuse, particularly girls and women of color.

On the website of her youth organization, Just Be Inc., Burke recounts an encounter with a young women who shared experiences of sexual assault. A survivor of sexual violence herself, Burke reflects that she wished had empathized with the young women in the moment: “ I watched her put her mask back on and go back into the world like she was all alone and I couldn’t even bring myself to whisper … me too.”

The hashtag #MeToo went viral after actress Alyssa Milano issued a call to activism against sexual harassment and violence on Twitter. Hundreds of thousands of people responded to her post in solidarity, raising awareness of rampant sexism and sexual misconduct.

If you’ve been sexually harassed or assaulted write ‘me too’ as a reply to this tweet. pic.twitter.com/k2oeCiUf9n

As a movement, #MeToo began with reports of workplace misconduct against women. Perpetrators included powerful men in the entertainment industry —notably former film producer Harvey Weinstein, who, nearly two and half years after initial public accusations against him, was convicted of sexual assault and rape in February 2020.

#MeToo founder Tarana Burke says Harvey Weinstein's conviction sends the message that "regardless of your money, or your wealth, or your race that you have to answer and be accountable for the crimes that you commit."https://t.co/UD2K3mWU1R

Following Milano’s tweet in October 2017, #MeToo quickly spread to acknowledge survivors from all walks of life all around the world, becoming a global reckoning with systemic sexual misconduct, especially as committed by individuals in positions of authority over victims.

Since it spread, the #MeToo has proven to be a powerful catalyst for social reform, but the movement has faced criticism, ranging from people who feel it has failed to sufficiently represent certain communities (such as  women of color, sex workers, or women in prison) to, inevitably, people who think it has gone too far (such as backlash from men who report they do not want to engage with women at work out of fear they will “get #MeToo’d”).

After #MeToo triggered the downfall of top Hollywood power brokers like Harvey Weinstein and actors like Kevin Spacey, many women in Bollywood spoke up about their experience of sexual harassment, breaking a long-established culture of silence.

#MeToo is used in a variety of ways. It is used as a social media hashtag by survivors of sexual harassment and violence in a public disclosure of their own experiences. This is done to show solidarity with other survivors and to illustrate how prevalent abuse is.

Took me decades to find my voice!!

Here’s an article that I wrote regarding #Duffy for the @MetroUK #endvictimblaming #metoo  #Unbroken ✊💛https://t.co/RFcEbQUMtv

I wrote a few poems to help myself process the dating violence I experienced. here is one that I am proud of #poetry #poet #healing #metoo #love #selflove #poem pic.twitter.com/036O6uklGH

#MeToo, as we’ve seen, is also used as the name of the broader social movement that is drawing attention to various forms of sexual misconduct and other abuses of authority, especially those that result from gendered power imbalances in social institutions. #MeToo can also refer to anything relating to or noting to the movement, e.g., #MeToo era.

For today’s paper, I wrote about whether #Metoo, buoyed by the Weinstein conviction, funded by the likes of Melinda Gates— can ever achieve a broad landmark goal, a la gay marriage or the civil rights act. https://t.co/oZ8OivY9Wx

#MeToo can also be a verb, used to identify or accuse someone’s abuser publicly in a claim of sexual harassment and violence.

“Getting #MeToo’d”: how Al Franken and his defenders erase the distinctions of punishment https://t.co/gxWmaAD90s

The English #MeToo is used around the world, though several international versions have been popularized in many languages, such as the Spanish #YoTambien (“I also”) and French #BalanceTonPorc (“squeal on your pig”).

#MeToo is also written without the hashtag and with various spacing and capitalizations, including MeToo and Me Too. It is not to be confused with me-tooism, or copycatting a peer or rival in some way.

This is not meant to be a formal definition of #MeToo like most terms we define on Dictionary.com, but is rather an informal word summary that hopefully touches upon the key aspects of the meaning and usage of #MeToo that will help our users expand their word mastery.