What does allosexual mean?

As a counterpart to asexual, the word allosexual helps normalize and destigmatize asexuality in society.

We were especially inspired to add allosexual by Dictionary.com user Ainsleigh Montgomery, who explained to us:

“I chose to submit the word allosexual because I believe that it should be a part of everybody’s vocabulary surrounding sexuality. Just as people often make the distinction between gay and straight, people should also be able to distinguish between allosexual and asexual. The inclusion of this word will help to educate those who are less familiar with lgbtq+ vocabulary, and I hope that when someone sees this word that they might have never heard in the dictionary, they will be inspired to do more research and open their minds to other lgbtq+ issues.” 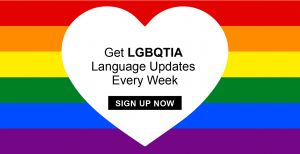 Where does allosexual come from?

Allosexual combines the Greek-derived form allo–, meaning “other,” with the word sexual. People who are allosexual experience sexually attracted to “other” people, whereas asexual people generally do not. You may recognize the combining form allo- from such words as allotrope in chemistry or allophone in linguistics.

Describing people who experience sexual attraction, allosexual spread in the asexual community in the early 2010s. An allosexual person can identify as heterosexual, gay, lesbian, bisexual, pansexual, or as another sexual identity.

But to understand allosexual, it’s essential to know more about what it means to be asexual.

Asexuality comprises a spectrum of identities of people who all have no or little sexual attraction to other people. People who identify as asexual—and who aren’t simply celibate, as it’s commonly misunderstood or stereotyped—may still experience romantic attraction to others, and they may even engage in or have been part of sexual activities.

It’s important to understand that people have different experiences of sexual and romantic attraction. It’s also important to note that people’s sexual orientation is not the same as their romantic orientation. A person can identify as asexual and homoromantic, i.e., they do not experience sexual attraction but are romantically attracted to and have relationships with people of their same gender.

There are many more aspects of asexuality. The Trevor Project’s Rory Gory explains them in their article for us, “What Does It Mean To Be Asexual?”

The term allosexual emerged in part in the asexual community to challenge the assumption of sexual attraction as the norm—and the implication that asexual people are somehow abnormal or lacking something for not experiencing sexual attraction. Cisgender similarly helps to normalize being transgender, and nonbinary helps move beyond the traditional male/female categories as the normative human experience and expression of gender.

In the 2010s, allosexual gained prominence over a number of alternative terms, including sexual, non-asexual, and others in the asexual community have found variously problematic. Still, some asexual people find allosexual itself problematic, as the term comes with its own baggage.

Allosexual has been used since at least the 1970s in several ways—especially in psychological, biological, and sociological texts whose understanding of sex and gender do not always align with current knowledge—that are unrelated to its meaning in the asexual community. For example, in his 1975 book The Varieties of Abnormality, Raymond Joseph McCall used allosexual to refer to the sexual development of young people directed towards others as opposed to themselves (autosexual).

Allosexual also resembles the Canadian French allosexuel, which has been used as an umbrella term for non-heterosexual people—that is, for lesbian, gay, bisexual, and queer (LGBQ) sexual identities.

Past aside, allosexual is gaining traction in mainstream discourse as more people become aware of the need for inclusive, nuanced language to express the wide range of sexual and gender identities, experiences, and expressions. The existence of a word like allosexual is necessary to shift the paradigm of sexual attraction as normative and to combat prejudice and discrimination against people on the asexual spectrum.

Allosexual is most prevalent in the asexual community.

For myself, I prefer no attraction or don't experience attraction because I've found when I say "lacking" or even "rare", allosexuals take that as an invitation to think it can be changed in their favor.

I still don't understand sexual attraction, even after tons of explanations from allosexuals. It seems like these concepts are just too hard to grasp without experiencing them.

Allosexual feeling, behavior, or identity can be called allosexuality, and an allosexual person is sometimes called an allosexual. Do note, however, that using gender and sexuality adjectives (cf. homosexual, transgender) as nouns for the people they describe is often considered disparaging and offensive.

A related term often discussed alongside allosexual is alloromantic, referring to people who do not experience romantic attraction to others, regardless of whether or not they are asexual.

if you use in a general term like allocishet, it just means they're both allosexual and alloromantic

Some people in the asexual community use the term zedsexual as an alternative to allosexual. The zed- in zedsexual is a chiefly British English word for the letter Z, zed, playing on that letter as at the other end of the spectrum from the a- in asexual. Other terms, such as alisexual, have also been used as allosexual alternatives, but are now less common.

An allosexual/zedsexual person does not fall under the asexual umbrella. That’s… the whole purpose of those words :) but I just call them “non asexual people” XD

This is not meant to be a formal definition of allosexual like most terms we define on Dictionary.com, but is rather an informal word summary that hopefully touches upon the key aspects of the meaning and usage of allosexual that will help our users expand their word mastery.