What does aromantic mean?

An aromantic person is someone who experiences little or no romantic attraction to other people. Being aromantic is not the same as being asexual.

Where does aromantic come from? 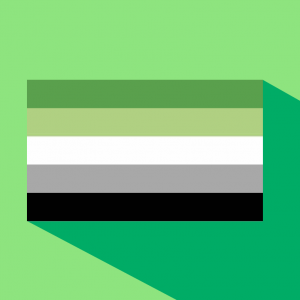 The word aromantic comes from the prefix a-, meaning “not,” and romantic, which in this context means “relating to romance.” The word aromantic is not to be confused with aromatic, which means “having an aroma; fragrant or sweet-scented; odoriferous.”

While there have been previous instances of the word, aromantic, in its sense of “experiencing no or little romantic attraction,” spreads in the 2000s. Romantic orientation (also known as affectional orientation) and sexual orientation are often conflated, as is asexuality and aromanticism.

Noun forms of aromantic are aromanticism or aromanticity (the state of not experiencing romantic attraction).

Learn more about the important differences in our article, “What Does It Mean To Be Asexual?”

I only found the term aromantic a few years ago but if I had known it existed before I would have been identifying as aro since I was a child.
bluefj, Reddit, April 12, 2017
Constant relationship drama, as people do not understand what am I looking for and not willing to listen. As an aromantic woman I have to dodge courting rituals and and [sic] all sorts of efforts to get me to date someone.
Cassiopeia, Arocalypse.com [user comments], June 24, 2016
There is certainly nothing wrong with the media and literature trying to portray the beauty of romantic love and sexual attraction, but there is when it comes at the price or aromantic and asexual people.
Stephanie Farnsworth, The Queerness, April 23, 2016
SEE MORE EXAMPLES

While sexual orientation usually also includes patterns of romantic attraction, noting the distinction between one’s sexual and romantic orientations can be quite useful in asexual, aromantic, and LGBTQ circles. For example, someone who identifies as gay may generally feel romantic, emotional, and sexual attraction toward someone of the same gender. A person’s identity can be explained in terms of both their sexual and romantic orientations when it’s helpful. Some examples of where this might be useful are discussions of identities like aromantic pansexual, heteroromantic asexual, aromantic asexual, or even biromantic heterosexual.

With this model, it makes sense that a person who’s aromantic isn’t necessarily asexual. If a person who identifies as asexual can seek out romantic relationships with no sexual component on account of their romantic orientation, it’s not too much of a leap for an aromantic person to be interested in seeking out sexual relationships without a romance component because of their orientation.

Are you aromantic? You’re spectacular! 🙂

A squish is the aromantic equivalent of a crush. It’s a strong desire for a close friendship or non-romantic relationship with someone. Essentially, it’s a “friend-crush” and it sometimes manifests with the urgency of a romantic one.

Aromantic is sometimes shortened to aro. This often occurs in conjunction with the shortened version of asexual (spelled ace) to form aroace or aro/ace.

This is not meant to be a formal definition of aromantic like most terms we define on Dictionary.com, but is rather an informal word summary that hopefully touches upon the key aspects of the meaning and usage of aromantic that will help our users expand their word mastery.